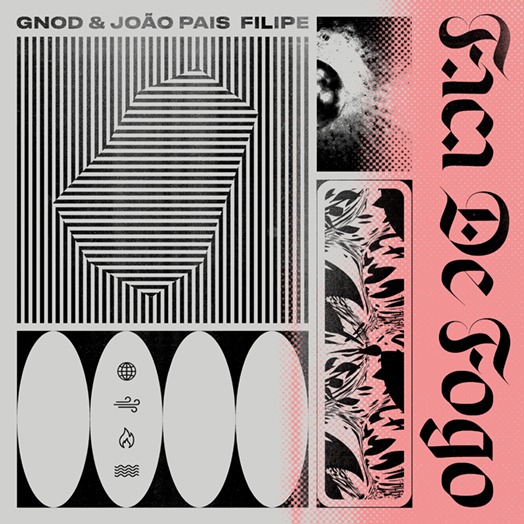 Mancunian noise psych legends Gnod first met João Pais Filipe at the Milhoes De Festa music festival in Barcelos in North Portugal, initially intrigued by a gong he’d made in the shape of a skateboard which formed part of an exhibition. The genesis of the collaboration epitomes the spirit of improvisation with three days of rehearsals forming the basic bare bones of the tracks, while an incendiary live show explored this even further. Eventually this was recorded over four days in João’s metal workshop with minimal overdubbing.

Faca De Fogo is being released by Rocket Recordings, not only home to Gnod but also such luminaries as Pigs X 7, Sex Swing and Kooba Tercu, all of whom I’ve reviewed for The Shaman. The cover is suitably psych as you’d expect and features the four elements, earth, air, fire and water, all of which tie into the album’s tracklisting. Faca De Terra (earth) which opens is the longest track on the album and is something of a percussive delight. The earth element is especially appropriate as there is something earthy and organic about the music. I could envisage a hippy type commune dancing round the fire at Stonehenge or Glastonbury (before it became hyper commercial), it’s a track that connects the listener to the natural world. A lovely atmospheric opener...