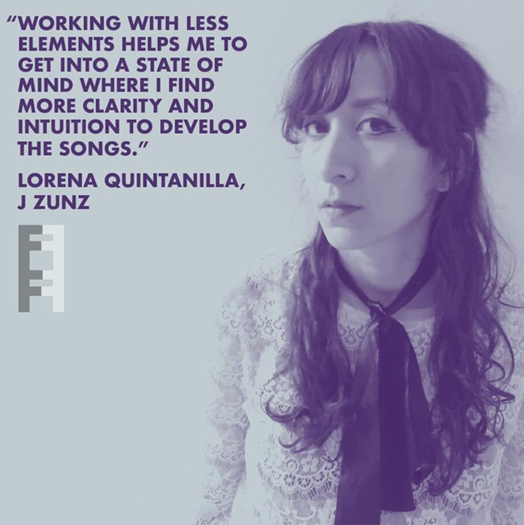 Created during a time of personal and political upheaval, it can be easy to feel cynical about the trajectory of the world considering the state we’re in some months later on Hibiscus‘s release. However each struggle is unique, not merely a compounded of what came before it, and J Zunz’s sophomore album explores each new emotion and evolution.

The byproduct of additional time and rumination, J Zunz is the solo project of Lorena Quintanilla – more widely know as half of Lorelle Meets the Obsolete. Taking her approach down to the sparse basics allows the songs to brood and build – playing heavily with emotions in the space between sounds.

Off Shelf: How are you holding up? Have you been based in Mexico throughout quarantine?

Lorena Quintanilla: Yes, I’ve been at home in Ensenada. At the beginning of the quarantine I was holding up just fine. I’m used to work at home so I didn’t have a problem. Now after 6 months under lockdown I’m not so sure. I just try to stay positive.

OS: This is your second solo album as J Zunz. Can you talk about what initially led you to want to create music outside of Lorelle Meets the Obsolete?

LQ: I started this project right after we finished an album with Lorelle… Because of different situations I found myself having some extra time. This extra time and some stress messed up with my head and I felt a little lost but at the same time filled with ideas. I had the feeling that having another outlet to develop some music alone would help me out and it did.

OS: Although it happened over a year ago, you talk about how Hibiscus came to you during a time of “personal crisis inside and political crisis outside”. Do you hear the songs any differently now that you’re sharing them with a world that might be more able to relate?...

Read the rest here:  Off Shelf