The New Noise interviews Deafbrick and reviews their mighty album 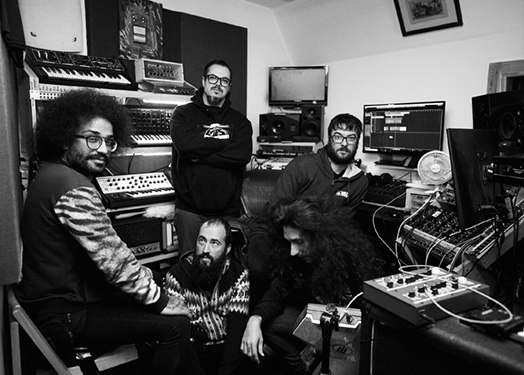 Deafbrick are born from the meeting between two names that have been able to win the interest of the most attentive and curious listeners, namely the Deafkids, composed by Marcelo dos Santos (bass), Mariano de Melo (drums) and Douglas Leal (guitar), and Petbrick, a project that sees Iggor Cavalera at work - obviously on drums - together with the sound manipulator Wayne Adams, who takes care of the electronic part in the broadest sense of the term. After the live that saw the five musicians interact on the Roadburn stage (the Deafkids already talked about it a year ago) the idea was born to meet to leave a lasting trace of the common experience and its potential. From the three days closed in the studio, a work was born which we will talk about exhaustively in the review, what follows is their version of the facts, a real user manual to understand every single facet of this interesting collaboration.

NN: A year ago I had the opportunity to interview the Deafkids and they talked about the experience at Roadburn and the remixes that appeared on Permanent Dystopia. It seems that all this has triggered something lasting, so much so that today we have a record that sees you engaged together. What happened and how were Deafbricks born?...

The website also has given the album a glowing review:

"A collision between two souls, we would say between past and future or rather a past-future that draws a dystopian scenario and combines human passion and electronic coldness in what we could define a bio-mechanical sound."

Which you can read in full  here: The NN review