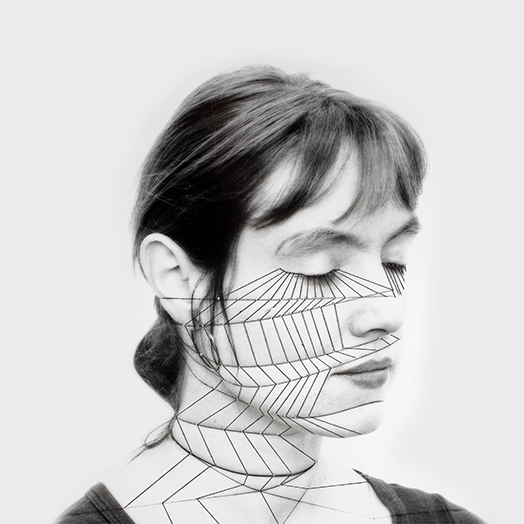 +++++RELEASE DAY+++++
Hitting the shops worldwide today is the brand new album from Julie's Haircut 'In the Silence Electric'.

In The Silence Electric is available on CD, Vinyl and digitally. With a sleeve by the wonderful artist Annegret Soltau, there are 3 different ltd vinyl versions, the special 'White/Clear colour-in-colour vinyl' version, an 'indie shop' exclusive on 'Pink vinyl' and another ltd shop version on 'Green vinyl.
-
“Band hitting a blistering career peak”  Trebuchet
“Sonically speaking, this is pretty thrilling stuff”  The Quietus
“This is a crowning achievement”  Raven Sings The Blues
“Drips with magnetic seduction”  Get Into This
“Head straight to the dance floor on a wave of fuzzed out glory”  Echoes & Dust
-
Listen here: Bandcamp / Stream
-
Press Release:
“In a self-experiment, I drew my face with black thread. The first to be affected were the eyes and mouth, because I could not see or speak – communication was destroyed... The details of my face seemed to be gone and, at the same time, frozen. It was similar to the act of mummification. I reached for the scissors and freed myself.”
These are the words of Annegret Soltau, the German avant-garde feminist artist, whose work graces the cover of Julie’s Haircut’s transcendent new album. It’s a piece that maintains as much of its power and relevance today as in the time of its inception 40 years ago, yet forms a curious parallel with a record that is nothing if not the sound of psychic liberation from the shackles of oppression and of the everyday.
‘In The Silence Electric’, the latest record from a band with a long history of sonic otherworldliness, is notable for its deft balance between hypnotic radiance and extrasensory intensity, between beatific calm and palpable anger. Yet it’s also a record which has arrived through a strange process of osmosis from a band confident enough to let subconscious and metaphysical aspects steer them in the appropriate directions.
The result was nonetheless also informed by a recent live soundtrack project the band embarked upon in tandem with Josef Von Sterberg’s 1928 classic ‘The Last Command’, as well as recent visits by the band’s Andrea Rovacchi to Mozambique, where he was subsumed by the local music and culture, bringing back a finger piano which makes its presence felt amidst the polyrhythms and primal scream therapy of ‘Pharaoh’s Dream’.
For all the nature of its divings, the result is a collection of supremely confident and cohesive ditties that sees the deep-end diabolism and mantric intensity of their Rocket debut, 2017’s ‘Invocation And Ritual Dance Of My Demon Twin’ expanded into a righteous fury and incandescent splendour. Whether it’s the heavy-lidded rapture of ‘Lord Help Me Find The Way’ (like Spiritualized transposed to 1970s Berlin), the menacing dream-state of ‘In Return’ or the Suicide-damaged psychic assault that is ‘Sorcerer’, all is subsumed by a bold singularity of intent, amidst a colourful firestorm of electronic monomania, jazz-tinged atonality and indelibly memorable vocal hooks.
“Even when we write about very dreamlike situations, or metaphors, we always address very real, concrete aspects and problems of our life” says the band’s Luca Giovanardi. “There is a lot of the classic dualism between sex and death on this record. Sometimes it’s more dark and gritty (“In Return”), sometimes it’s more elevating (“Anticipation of the Night”).”
“There’s a theme springing from the title of the record and the photos of Annegret Soltau that deliver some sense of helplessness, suffocation, difficulty in communication” notes Luca. Yet for all this - and paradoxically enough - ‘In The Silence Electric’ is both this mysterious and rebellious band’s most adventurous and most direct record to date - not to mention an ever more compelling transmission from renowned experts in altered states.
-
The stunning artwork is by artist Annegret Soltau
---