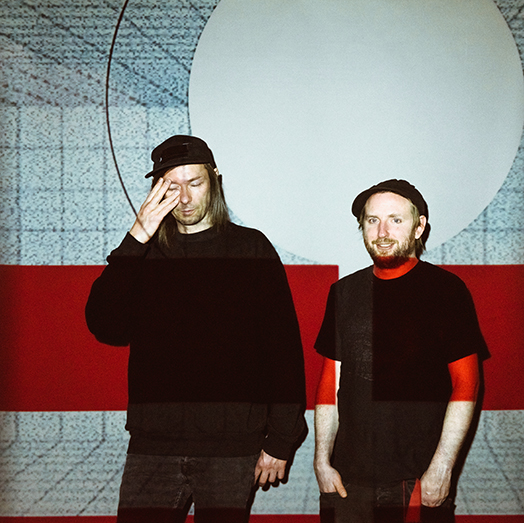 When the single Borrowed Lies landed On The Stereo back in December 2018, it immediately piqued our interest (and gave our ears a good old bashing). Such was our enjoyment of the track, we were determined to find out a little more about those responsible for this, “scuzzy call to arms.”

Formed in 2009, the London-based duo of Jussi Brightmore and Tom Fug have recently received their third album as Gum Takes Tooth. Arrow builds on the work that the pair laid down on previous records, Silent Cenotaph and Mirrors Fold. Their sound, built from the drums up, combines electronically manipulated beats with distorted sounds and vocals, packing a devastating punch which you’d think was created by an entire army of battle-hardened sound warriors. There’s also plenty of substance beneath the noise; Arrow deals with themes of fatherhood, class struggle and the difficulties of living in Britain’s capital city during these uncertain times.

With plenty of questions in mind, we recently tracked down the pair to discuss their unique approach to songwriting…


Are there specific strengths that come from being a duo?
Jussi Brightmore: “Absolutely. I like being able to bat ideas around so quickly, having each other to riff off but not getting bogged down with having to put everything through a committee. We sometimes don’t agree with each other but that’s fine – on the whole, it just means we don’t do whatever’s contentious and get on with it.”
Do you have a set way of starting a song?
Jussi: “I think it’s worth mentioning that we don’t write “songs” in the traditional sense of, ‘I’ve got these lyrics,’ ‘I’ve got these chords/this riff/whatever,’ and, ‘Now I’ve got an idea for an arrangement.’ The way we’ve been working since the beginning is quite unusual in that, through the designed-in technical necessity of our self-built setup, we have pretty much always had to play at the same time to create any sound at all.
“Tom’s drums trigger the electronics, I manipulate them live, playing dials and buttons to mould sounds and create different note sequences without any keyboard input device or scale as a reference point.
“In the usual sequence of things, Tom will just start playing an acoustic drum rhythm and I’ll start building sounds with that rhythm. Often this will stop, we’ll junk the first attempt then start again with either or both of us proposing refinements or new rhythm ideas that is a response to the first. Definitely both of us equally throw in suggestions. It’s always exploratory. Even if we start with a defined idea of what we want to do, it pretty much invariably turns into something utterly different quite quickly.”
Tom Fug: “Generally all our songs come out of jamming. Although one of us might have an idea of a type of sound or rhythm we are after, more often than not, the result is nothing like the initial idea. We definitely don’t have a strict approach to songwriting – the only constraints we have are technical ones. Due to the nature of our setup, it’s difficult to make any sound without both of us being present.”......
Read the whole  interview: Songwriting Magazine