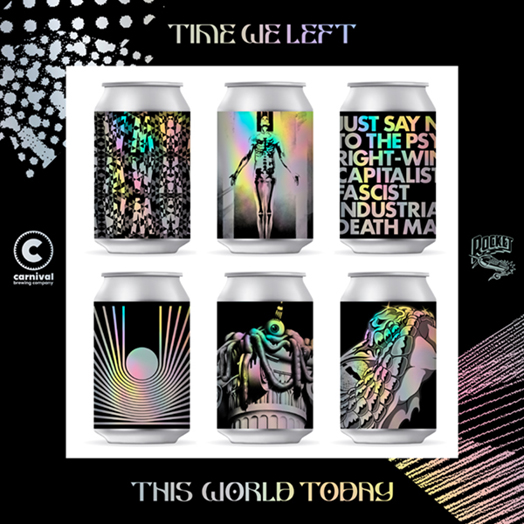 It all started back in the distant past, when the brewery was a mere 50L garage set up and our plan was still in its incubation period.

We were out in some sort of dive with the Bonnacons talking about music, moogs and beer (obvs!). Dom was sat between Kate (singer) and Sam (drummer and visual artist) talking about a beer we’d love to make for the band. It was decided by Kate it would be a margarita sour and Pracatan was born.

Something we didn’t consider was the future and what has ended up being a beautiful collaboration with the Bonnacons’ record label, Rocket Recordings. After Pracatan’s second outing (more to follow in Autumn), we got talking to Rocket chief honcho, Chris Reader during lockdown about the future of live music. Will it return? In what form? Can bands ever tour again? We decided it would be a splendid idea to create a special beer launched to celebrate the welcome return of live music once the infernal lockdowns and social restrictions were lifted.

We made a 5% hazy pale, with Mosaic and as much Citra as we could get into the fermenter without breaking it. Chris kindly created amazing metallic (it should have been holographic – that was our bad) labels for six seminal Rocket Recordings albums. We couldn’t believe our eyes as the labels rolled into the brewery ready to be applied to 800 cans. Legendary bands, Goat, Pigs x7, Pharaoh Overlord, Gnod, Teeth of the Sea and Utopia Strong who we love at Carnival HQ … on cans of our beer! We produced the pale ale, we packaged it and put it up for sale once the bands were sent their supplies. The limited edition 6-pack flew out of the webstore before we could say “just say no to the psycho right-wing capitalist fascist industrial death machine.”

Our mission to bring music and good beer together took a huge leap forward with Time We Left This World Today and we thank all our customers who bought it, for Chris who showed the true spirit of collaboration and passion for his music and the idea (as well as sick design skills), and for the bands who supported this first release.

Yes, that’s right, we are making this again because we didn’t make enough first-time round.

Keep your peepers peeled and the website bookmarked for a re-press of the cans and kegs, due out around late September.