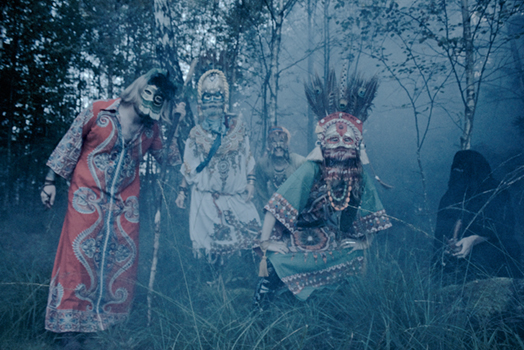 Mysterious and magical. Swedish Goat - with roots in Korpilombolo or Gothenburg, depending on who you ask - releases a collection, Headsoup, which helps in the export interest around the free-form ensemble.

Goat is an odd bird in Swedish music exports. For each album, the group has received increasing reaction. The album World Music has, for example, sold 40,000 outside Sweden and the group has performed at both the English Glastonbury Festival (twice) and the American Coachella. The group's single top live was otherwise when the Brixton Academy in London was sold out.

Now comes a collection, Headsoup, with songs from the past but also some new ones. The single Fill My Mouth comes today Tuesday 2/8.

I emailed the character The High Priest of Fuzz Guitars and got a slightly different response than this vignette is used to.

Five years ago Requiem - what have you been up to?
- Yes, we took a break, did something else. Mr. Goatman did a solo record, someone played free jazz in Djinn, Gås released some rock n roll. Then we had sessions and drank coffee as well.

How secret are you really?
-Super secret. Not even my partner knows who I really am. We only go out after midnight and then only masked.

What's happening around Headsoup?
-We will go out and play a little, not as much as usual for obvious reasons .. A gig in Malmö at least and a few other things in Europe. We are not usually super involved in campaigns and such, the label handles that best. But there is usually a bit of pressure and such, and lately we have had a bit of a spin on radio in the UK as well. Queen of the underground has received an A-list on 6Music, for example, that's a bit fun.

What kind of company is Rocket?
-Rocket Recordings is an indie label run by two fine sluts in London. They only release things they like themselves.