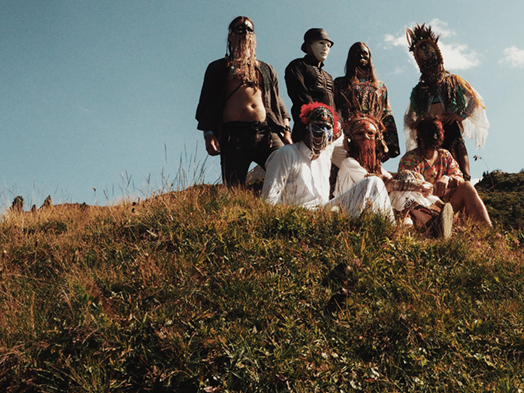 Makers of the finest psychedelic freakout, Italo-horror movie voodoo blood sacrifice dance party music in all of Sweden, Goat, have been mostly quiet since 2016's Requiem, having only released two 7" singles since. This inactivity has not changed much, but we do have Headsoup (a tip of the hat to the Stones but also a very Goat title) that's out today and collects odds-n-sods tracks from the last 10 years, including a number of non-LP singles, b-sides, alternate takes and more. There are also two new songs, recorded last year and both are killer: "Fill My Mouth" is sleazy flute-and-fuzz-fueled funk, while "Queen of the Underground" rides a heavy, trippy groove for nearly seven awesome minutes.

There is a lot of other great stuff here too: single-only tracks like 2013's blissed out "Dreambuilding," 2015's snakey, rhythm box-driven "It's Time for Fun," and 2018's cinematic "Let it Burn." Listening to this compilation does make you wonder if the single format isn't Goat's natural habitat. As good as their three albums are, they work within a very specific set of sounds and styles. A little goes a long way, especially when their definition of "little" is a doom-funk behemoth like "Queen of the Underground." Just keep 'em coming at a regular pace.