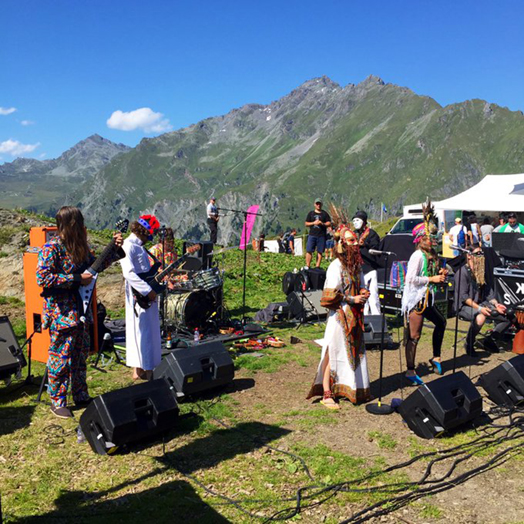 Under the banner of its prized "Rocklette" in the Val de Bagnes, the Palp Festival hosted on Wednesday at 2000 meters above sea level concerts by the Spanish Tundra and Swedish Goat in the idyllic and panoramic setting of the Brunet hut.

Three years since they had not stepped on a stage. For the Swedes of Goat, the enchanting setting of the Val de Bagnes undoubtedly fulfilled all expectations on Wednesday, as well as those of the Spanish instrumental rock quartet Toundra which opened the festivities at the beginning of the afternoon on the small hill overlooking the cabin. Brunet, nestled at an altitude of 2000 meters and popular with hikers.

The Dents du Midi cut out in the background, the green mountain pastures in focus and a few hundred spectators exempt from sanitary passes replacing for a time the alpine cows, the two groups seem to have savored this idyllic setting bathed at last in a frank summer sun.

Hypnotic rhythmic loops
Under the banner of the now cult "Rocklettes" of the Palp Festival, events combining rock and raclette, which began sold out last weekend in the Goly cover and end on Sunday at the Lein pass, the expected Goat have appeared. dressed up as voodoo wizards or flanked by animal masks that don't really stand out all that much in the district that houses the famous stuffed animals and stuffed animals from the Evolène carnival. Even their tracks mixing psychedelic rock and world music seem to act as rituals intended to drive out evil spirits...