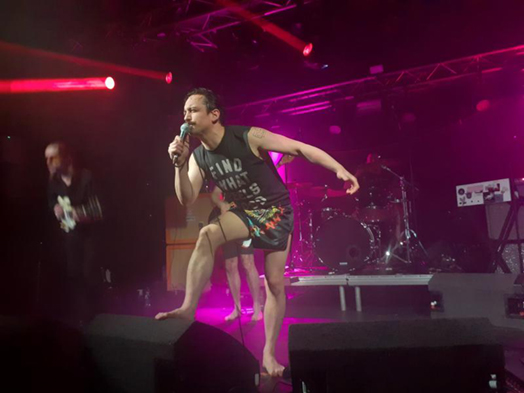 When those cold winter nights start closing in, there is really only two choices for facing up to the unpleasantness that this brings. Stay at home, batten down the hatches, whack up the heating and blow the expense. Or go out and immerse yourself in some hot and sweaty rock’n’roll.

Clearly, the majority of us at theartsdesk.com favour the second option. So, when the raucous Pigsx7 finally made it to Birmingham to support their Viscerals album of 18 months ago, there really was no choice about what to do.

It may have been cold and wet outside, but Pigsx7 weren’t going to be guided by that with their stage wear. Striding on in front of the audience looking somewhat pasty in shorts and t-shirts – except for ever-cool guitarist Adam Sykes, who looked particularly dapper, dressed in black – they soon got into the swing of things by launching into the artillery barrage of the speedy “Reducer” with a retina-burning explosion of lights where previously there had just been a fug of dry ice. From there, they took the thumping “Rubbernecker” and “Halloween Bolson” from their new album and pulverised them, while bouncing around like Geordie goblins.

“It’s always special to play Birmingham” announced singer Matt Baty to much hilarity, “As that’s where our musical fathers come from – UB40”. It was almost as if this was a signal for the audience to liven up, as next tune, the foot-stomping “Sweet Relief” saw the mosh pit erupt in no uncertain terms. Bodies slammed into each other, beer was spilled, and an almost constant flow of bodies began crowd-surfing towards the stage...