Ransom Note interviews Steve and Kavus about their new book 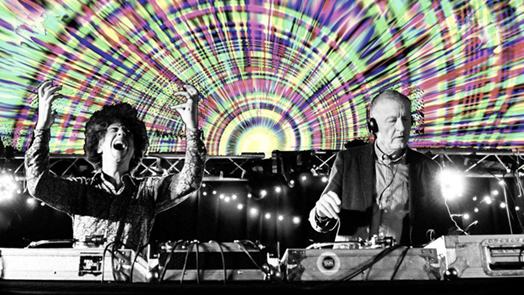 It’s hard to say which plotline is more ridiculous: a gang of diseased bats and a fish market become responsible for the biggest humanitarian crisis since World War II, or Steve Davis touring the festival circuit as part of a DJ duo and live act… and he’s actually good. From what started as a bit of laugh, the musical journey of Steve & Kavus has taken them to serious critical acclaim as part of The Utopia Strong: a tough-to-pigeonhole psychedelic mindfuck (with Steve on the modular synth) that Steve Hillage rated highly enough to invite onto his band's first tour for 40 years. It’s little wonder they wanted to write a book about it. Who wouldn’t?

Medical Grade Music is part-memoir and part-excuse-to-wax-lyrical about the (often obscure) musical acts and creative characters that have inspired the duo throughout their lives. If this sounds like the indulgence of a couple of ageing rockers then you’d be right, but rather like their musical performances, they carry it off with such authenticity and manic energy that you can’t help but join in the fun with them. In among the funny anecdotes and musical trainspotting, there are also some surprisingly poignant human stories.

Steve and Kavus first met in 2009 at a Magma gig in Paris. Although Steve was rather busy being a world champion and TV personality, he had actually been Magma’s UK promoter for a time in the late 80s. He lost a fortune, so it was a nice twist of fate that Magma became responsible for his next (and infinitely more successful) career in music...