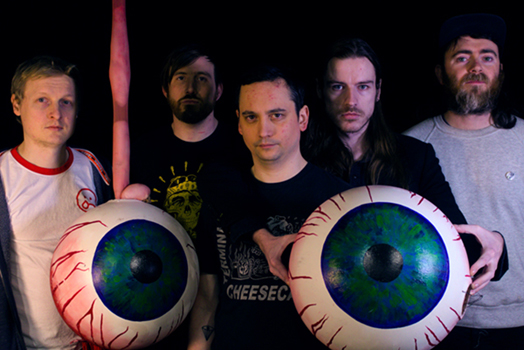 Before the pandemic, Pigs Pigs Pigs Pigs Pigs Pigs Pigs were riding a considerable wave of momentum. Their brand of colossally heavy psychedelic noise rock was proving a hit beyond any scope they might have imagined. Off the back of an exalted live reputation, the group were selling out bigger and bigger shows like a 1,000 capacity gig at London’s Scala. For their third album Viscerals, they had their first run of dates booked across the US across March and April. “Going to America felt like the next step, something we hadn’t done before,” says guitarist Adam Sykes over the phone.

As the severity of the pandemic became more and more apparent, so too did the reality that the group’s American dates wouldn’t be able to take place. The sudden erasure of live income for a band of Pigs’ stature – a group rarely away from the road – is significant. “A lot of the costs for America, visas and such, we already paid for and became useless essentially,” Sykes says. “We’ve taken a hit as a unit.” Regardless, he says “we consider ourselves the lucky ones in all of this. The majority of Pigs work full time along with the band, so we’re not in the position where our income has been entirely halted.” Their fanbase is now significant enough that they found plenty of support when it came to a long-demanded repress of their first record, ‘The Wizard And The Seven Swines’...