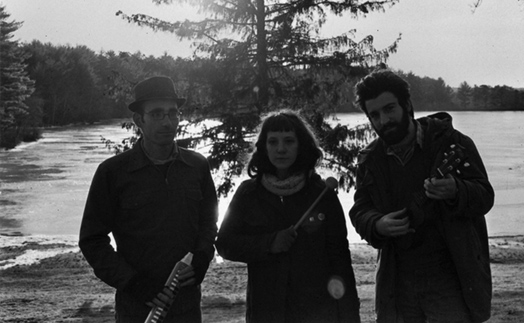 Long Shadows is a retrospective of Urdog, the work of a mercurial band whose music may have been summoned from fog and ghosts yet possesses considerable staying power beyond their brief time on the planet. “We were influenced by the horror of late-capitalism in general every day” says drummer and vocalist Erin Rosenthal, who first met Dave whilst ‘bouncing on a couch like two 5 year olds’ at a Flying Luttenbachers show. This glued and glues us together, also love of bicycles, French fries and faerie folk. Big influences for me were Robert Wyatt, Incredible String Band, Dagmar Krause, but especially This Heat, Riot Grrrl and 90’s hardcore”.

Recordings, whose Chris Reeder and John O’Carroll were introduced to the band in the early ‘00s through Steve Krakow of Plastic Crimewave Sound and via the fabled Aquarius Records new release list. Revisiting the two full-length Urdog CDs in lockdown and realising that none of this material had been released on vinyl, the label took a chance on a 15-year-old email address and were pleasantly surprised when organist and vocalist Jeff Knoch replied. “Something that kind of stands out in retrospect is that, relatively speaking, Urdog existed for a rather short period of time—just three years” says Jeff, describing the utilitarian methods of the band “I think we all favoured immediacy and directness over belaboured production and refinement. If you let certain shortcomings, or inabilities or even a lack of the “appropriate” tools inhibit you, you’ll never get anything done”...