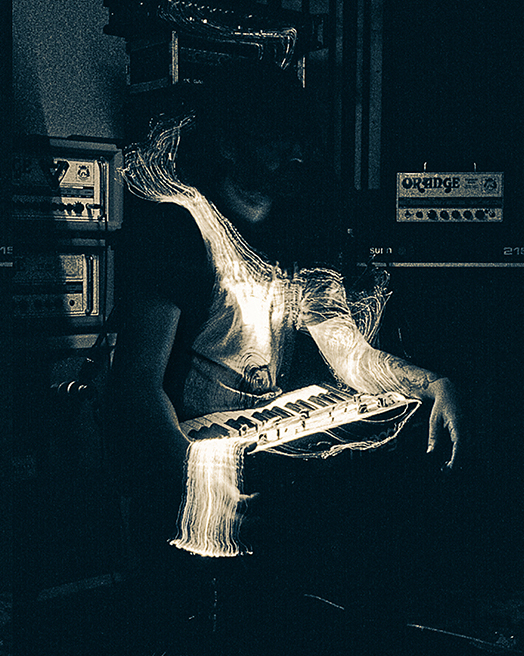 You may know of Wayne Adams from his production of bands such as Gum Takes Tooth, Terminal Cheesecake and Casual Nun at his stronghold Bear Bites Horse Studios. As well as from his bands Death Pedals, Big Lad and Pet Brick. I myself have encountered his work many times both as a producer and musician when writing reviews, but aside from his work as part of Hominid Sounds and his musical output, I really don’t know much about him, so I figured I’d interrogate him. Let’s turn the microscope on the meticulous engineer for a change.

(((o))): I’ve mentioned your bands above and I see you playing synth extremely well and a lot, but I was wondering how many instruments do you actually play and which do you feel is really the most fun? Is there any you wish you could play in a band, but you’ve always ended up landing somewhere else? I kind of feel like once you can play synth and have that knowledge, it’s probably hard not to end up being the synth player, same as when people can play drums they kind of get stuck behind the kit.

WAYNE: Haha, I wouldn’t say I play synth well, I know how to use a synth, so I can get them to play themselves, if that makes sense! I can play lots of things, I’m not great at anything, but have just enough knowledge to get by! I’ve played drums in Dead Arms, I used to play Bass in Death Pedals and I did a stint as “Fat Zoo” on drums for Luminous bodies. Recently I have started Wasted Death, a Kind of D-Beat/Punk/Thrash band, in which I’m going to attempt to play guitar. I have never played guitar in a band! So yeah, I move around a lot, keeps things fresh!..