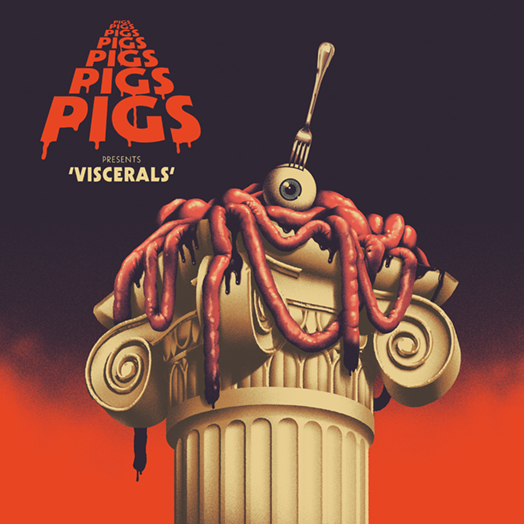 This is what they say:

Louder Than War
Gargantuan riffs, demonic vox and an uber-cool vibe that distinctly references past masters yet still manages to sound totally fresh. Viscerals is the sound of impending doom and the perfect soundtrack the shitshow that has been 2020.

The Quietus
The last 12 months were supposed to be the biggest year yet for Pigs Pigs Pigs Pigs Pigs Pigs Pigs. They were all set to take another foot up the ladder of venue sizes (while still keeping it real with dates at The Cluny, of course). They'd lined up their first US dates and were ready to dazzle American audiences with riffs, roars and Newcastle FC shorts. More mags and websites were covering them than ever before. Graham Norton was being groomed to have them on his chat show instead of booking Harry Styles every week. Then - SPLODGE! - someone got coughed on by a bat bat bat bat bat bat bat and Pigs were consigned to remain in the North East like Paul Gascoigne if he'd never signed to Spurs. Released just as Lockdown Phase I kicked in, Viscerals was a potent mixture of skull-cavingly heavy rock, mega metal, intense anxiety, sweat, sludge and (to channel Liars for a second) BLOOD! BLOOD! BLOOD BLOOD! Crank it all the way up to 11, screw a red lightbulb into the socket, dial the thermostat to 'Level Sauna', ask a tall housemate to stand in front of you while holding a plastic glass and it'll feel just like the gigs gigs gigs gigs gigs gigs gigs that fate so cruelly denied us.