Cardinal Fuzz are proud to present Anthropropph and Big Naturals 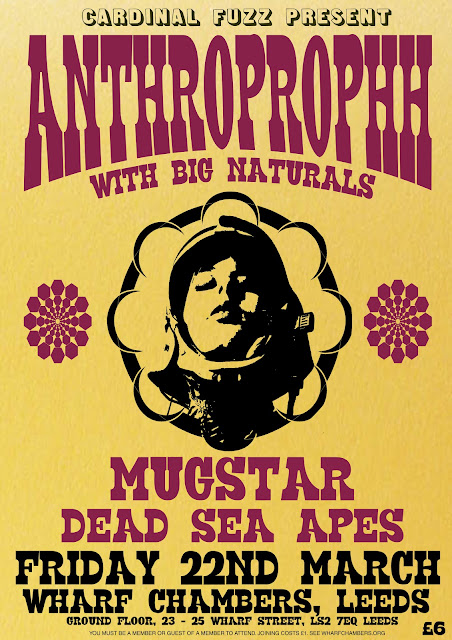 Cardinal Fuzz are proud to present:

Legendary guitarist from The Heads, Paul Allen, has stuck out in his new guise of Anthroprophh. Although The Heads were pretty damn far out, Anthroprophh ploughs further into deep space, channelling his love for all things Kraut, psych, prog and oddity. A new record is due in January on the legendary Rocket Recordings described by Julian Cope as 'Frenzied monster truck haulages and organ-based Mithraic burn-ups of the Agitation Free variety'
facebook/Anthroprophh

Fellow Bristol-ians Big Naturals will provide the 'Proff's primal rhythm section for the night. Big Naturals have recently released their debut on their own Greasy Truckers label to rave reviews. Arch Drude Cope-y enthused that Big Naturals '... come across like an ambient Crass performing the Who’s entire TOMMY soundtrack in the style of MOUNTAIN GRILL-period Hawkwind. That harsh, me babbies! That sweet, me kiddies!'
bignaturals.bandcamp

Support comes from Manchester band Dead Sea Apes. This trio have become masterful at creating huge vistas of sounds. A perfect concoction of sun-scorched psychedelia, raga infused improvisation and classic kraut-rock circularity, Dead Sea Apes recall Grails and Barn Owl at their best.'Stunning, visceral and downright thrilling... you’re going to have to trust me on this one – Dead Sea Apes are really something very, very special indeed.' Terrascope
deadseaapes.bandcamp

*IMPORTANT
Wharf Chambers is a members' club and you need to be a member, or guest of a member, in order to attend. To join, please visit wharfchambers Membershipcosts £1 and requires a minimum of 48 hours to take effect.
wegottickets
facebook