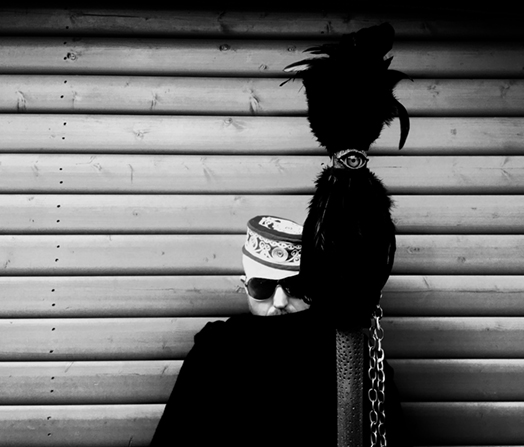 My initial thoughts were, “Can I just say… this album is fucking tremendous!” Read on further if you want the long version.

One of my go-to “altered state” albums has long been The Isness by Amorphous Androgynous – those who know, know. When I spotted a vinyl version of the Abbey Road mix of this fine slice of English wiggoutery on Discogs, I had to snap it up. I just played it prior to giving my shiny new copy of The Holy Family a spin, and it is the perfect hors d’oeuvre for David J. Smith’s main course, I must say! Gaz Cobain’s lysergic musings meld seamlessly into I Have Seen the Lion Walking, the opening woozily wonderful song on this effervescent new album from a new-but-old band, from whom we always await fresh waxings with a puppy-like eagerness.

You see, The Holy Family is really those tremendous righteous noiseniks Guapo wearing Kosmische make-up and a lush feather in their cap. Convening in Plague Year to craft a new album, David J. Smith and his mischievous troupe, namely Kavus Torabi, Emmett Elvin, Sam Warren, and Michael J. York, found that the heavy manners of the times was guiding the Guapo muse into an entirely different and colour-negative elysian landscape, far removed from its usual altar of levitational and deeply spiritual insistently heavy and heady rhythms. Here, where the musical kaleidoscope frequently hones in on rolling vistas of odd but vaguely calming hues, before heading off through clouds of Kosmische dust, things are not what they once were or may ever be again...