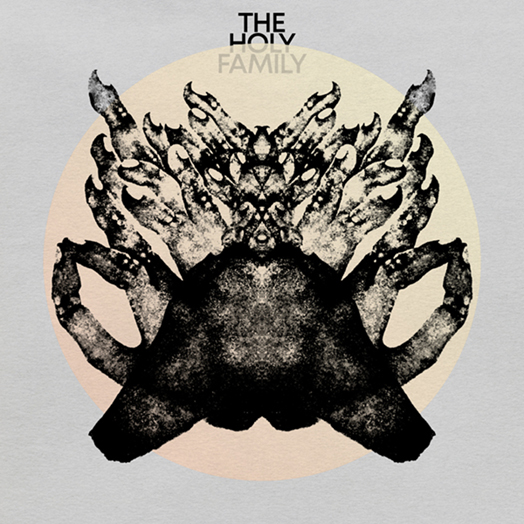 This has a weird energy, a smokey commune bonfiring prog, hippy trippiness and the more esoteric end of the musical spectrum.

A flamboyant mirage angeling the experimental itch of the Ya Ho Wha 13, King Crimson and Comus (and a hell of a lot more). The Holy Family‘s head architect David J Smith has gathered together a host of like-minded travellers, including The Utopia Strong’s Kavus Torabi, and Téléplasmiste’s Michael J York to bounce ideas between.

The Holy Family is a fusion of spacey collisions and peppered psychedelics inspired by the shimmering surrealism of Angela Carter and displaced realities of Dorothea Tanning, the narrative slips past, as snippets zero in, dreamily detonate, affix themselves like uneven tapestries alive with candied contours and half-lit rabbit holes.

That tindering ’70s Brian Eno off-cut that is “Skulls The…” coaxing the cobra to cast wavery silhouettes across the room. The acoustic dawn of “Inward Turning Suns” that merrily ribbons your head like a Woodstocked aquarius, its flowered braids kaleidoscopically kiltering into the Can-like candy of “Stones To Water” that beetles some tasty percussive recoil and gargling crocodiles. A diverse universe, satirically pinching at its influences as “Desert Night” lustfully devours a Comus-like glee, and the musicality drifts out from its moorings to Rorschach the uncharted...