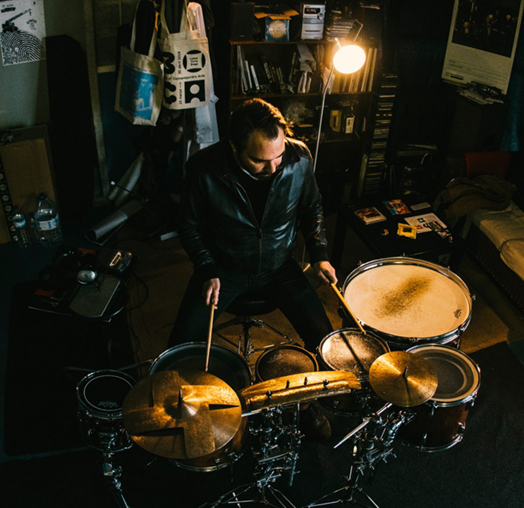 This conversation was supposed to happen a few times. First, before the 2019 Unsound Festival, where João Pais Filipe played three sets, then at the beginning of 2020. Finally, we managed to talk in the second half of the pandemic year. There were many reasons – during the last 10 months, the Portuguese drummer released no fewer than 5 albums, and more are still to come.

João Pais Filipe is an extraordinary and original musician in terms of performance techniques. I had the opportunity to see him playing solo at the Tremor festival in 2019, when – using the unusual acoustics of a car garage that served as his venue – his music was intense, trance-like, indigenous, but also techno-like. The drummer from Porto is characterized by an extraordinary motoric sound, he hardly uses the kick drum at all, but he nuances the rhythm very well, playing on the floor toms, hi-hats and gongs. He creates gongs and cymbals on his own, expanding his musical sound arsenal as a sculptor. Not only do they have remarkable acoustic qualities (each is designed differently), but also visual ones – due to the texture, material and unusual sculptures that Pais Filipe places on them.

2020 showed his extremely broad horizons – from his motoric, krautrock incarnation with Burnt Friedman, through a more progressive style with GNOD, the powerful, metal sound with Julius Gabriel as Paisiel, but also an exploration of resonance and electronics with Rafael Toral. It is also the year of his second solo album, Sun Oddly Quiet. Below you will read about his musical path, his fascination with metallic sounds and Einstürzende Neubauten. At the end of the text is a brief review of his albums from the past months. If you missed out, now is the time to catch up...