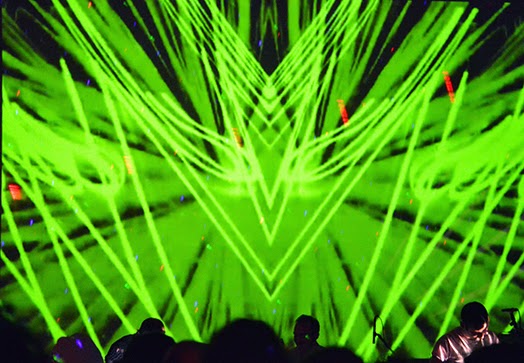 Photo of Rocket's Johnny O's visuals during Teeth of the Sea

Here are the extracts from the Rocket shows (though no Goat review):

Lay Llamas
Next up on the Camp stage were the Lay Llamas. I must admit that since finding out they were playing this year’s festival I had struggled to get into them. However, about a month ago, I found myself listening to their album ‘Ostro’ and everything seemed to suddenly click into place, and I now find their music to be relaxing and thoughtful – it definitely takes a few listens before the challenge also kicks in. Live the band were brilliantly exciting as they pounded out a high tempo set full of deep grooves, fascinating asides and interesting diversions. If that sounds a bit strange what I am trying to convey is that the set would have been a huge success with the beats alone, that there was so much more going on here is testament to a band who I am sure will take us to some very interesting places in the coming years – another winner from Rocket Recordings.

Anthroprophh
Here’s a warning for those of a nervous disposition, never go and see Anthroprophh live! This assault, there’s no other word for it, was as loud and intense as anything I’ve witnessed. It was thrilling, visceral, mind blowing; and yet also had nuance to it. Playing mainly tracks from the brilliant new album ‘Outside The Circle‘ the trio, comprising former ‘Head’ Paul Allen and fellow Bristolian duo The Big Naturals (Gareth Turner, bass/ electronics and Jesse Webb, drums), invaded our very souls with a performance which was both raw and complex. There was no escape from this sonic attack which was relentless and utterly invigorating and by the end I felt exhausted and yet strangely cleansed. If you like your music loud, heavy and intelligent go and check Anthroprophh out, you won’t be disappointed.

Hills
Hills were another of my must sees at this Festival. On record the band seem to straddle the divide between melodic song structures and more dissonant Krautrock improvisations with comfort and ease. This was something which was replicated with this live performance consisting of a series of 10 minute plus jams which explored many areas of music, but never lost its way. It was one of those sets which seemed to build in intensity, taking the audience to increasingly deep psychedelic experiences, providing the backdrop to explore and reflect. The light show, which my photos hardly do justice to, was, like most of the bands who occupied the Camp stage on this amazing night, stunning. A brilliant visual, aural and existential experience.

Teeth of the Sea
Of all the Rocket Recordings artists who played the Camp stage Teeth of the Sea were perhaps the ones I least expected to like. I have the band’s ‘Master’ album, which for me is on the edge of accessibility. As a result I thought that the band might be too abstract for my taste. What I experienced, however, was my performance of the Festival. Beginning with a single brass horn being sampled and repeated, the band proceeded to add layer upon layer of instrumentation building the intensity of the music while also adding the sort of beats that defied the audience to keep still. This was a performance that I found both exciting and, in places, intensely moving in a way that one rarely gets in this form of live music. This was aided by a visual show which was at times ostentatious, and at others bleak and disturbing. Good music can challenge, but it can also entertain. For me Teeth of the Sea did both in spades. No superlative would be adequate!

Gnod
From the moment GNOD (excitingly with White Hills’ Dave W also on stage) hit the go button the packed Camp knew we were in for something special. This collective may be unpredictable in terms of who is on stage on any one night but this was a truly momentous performance of really exciting and visceral improvisations which took the audience to high after high after high. GNOD were in the mood to party and party hard. Hard and heavy as the beats, jazz improvs, repetitive drones and guitar attacks came in wave after wave of sonic attacks which at the same time gave us energy and sapped our resistance to impediment. It was a huge feel good performance at a time when we had been though huge slabs of intensity earlier in the evening. Inspired and inspirational!