More reviews of Gnod and Goat from Supersonic 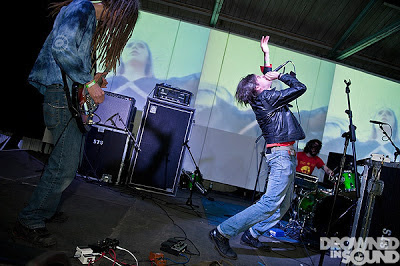 Here are some online reviews of Gnod and Goat's sets at this years Superonoc festivals. Also been good to read some great reviews of friends of Rocket Hey Colossus, Drunk in Hell and Ufomammut:

Gnod
Manchester kraut-psych-rockers Gnod perform a blistering set of hypnotic stompers, another revelatory high point of the festival. Their sound is hard to pinpoint, shifting from Krautish space rock, psychedlica, grungy mischief and funky grooves, but consistently gripping with the potent stage presence of wiry frontman Neil Francis, who comes across as the bastard lovechild of Mark E Smith and Brett Anderson, if you can imagine such a creature.


Highly-anticipated Swedish folk-pop-rockers Goat appear in full-on fancy dress voodoo regalia and play a collection of jubilant, hippyish tunes. The band tread a fine line between the sublime and the ridiculous, but you get the feeling that if you ever found yourself being burnt alive in a wicker man, Goat are the people you’d want there providing the soundtrack and cheering up the occasion. 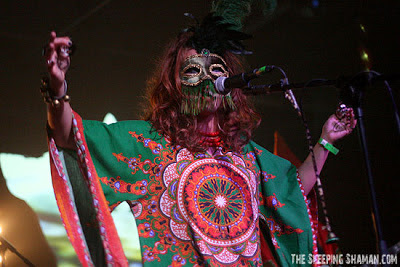 Gnod
The perennially excellent Gnod are a bloody good time waiting to be had by new heads/ex-heads/heads and even non-heads. More or less playing the same set that they bounced through at Roadburn six months previous, but only even louder and heavier, these Manchester-based jam-folk are bone fide voyagers into deep inner space: electric gypsies who pump and riff their way through expansive krautrocked-out sonic meditation of the most psychedelic order of multi-layered brain-body orgasmic death-rhythm. They should be booked at any self-respecting festival of credibility – heavy enough to please the head-bangers and experimentally left-field enough to placate the Wire readers and damn trippy enough to soothe the rest…


Goat
Having been an avid appreciator of the Goat album (‘World Music’) for a couple of months I was really looking forward to their quirky afro-psych-folk work-outs with a hot slavering brain yet also wondering how the hell they would pull it off. And pull it off they just about did – drawing exclusively on their one fine album they put on a show from icy Sweden that featured masked and kaftan-clad musicians and two frenetically grooving and fugging female singers all making enough rhythmic clamour and psyched-up voodoo pantomime to etch an irrepressible smile on the faces of all the assembled throng. Although many felt far too tired and drained to respond thoroughly to the funk-stained beats, they tried with little sways and nods and twitches of the shoulders. ‘Goatman’ received a huge and rapturous response naturally but the strength of the song writing on the whole album shone through a set that put ‘World Music’ through its paces like a rigorous laboratory test of musical robustness, concluding that Goat’s debut is of exceedingly high quality and that here was an ensemble who could go on to become a landmark of rogue Swedish genius. I eagerly await the second album. 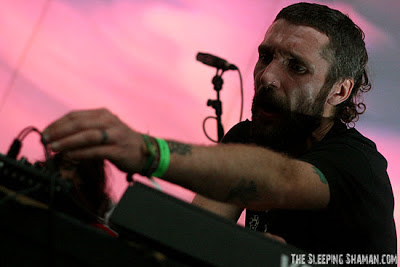 Goat
Another highlight of the weekend for me followed on Warehouse Stage in the form of Goat; this colourful 7-piece hails from an unlikely remote village in Sweden. Resplendently clad in Haitian voodoo-like attire they powered through a lively, melodic set that was enthusiastically received. Their debut, World Music, is aptly titled as their tunes draw on many different genres from around the world, Afrobeat and Psych. Rock being at the core. Lots of fun, perhaps not so much for noise/drone fans, and a little 'mainstream' (!) for others.