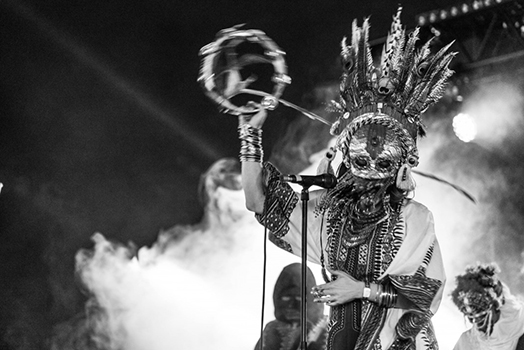 When we heard Swedish psychedelicists Goat were returning to Bristol, we were more than eager to attend. Ask anyone who has ever seen them live and you can almost guarantee they will say it was one of the best live performances that they have ever witnessed. The experimental collective have created a completely original fusion of styles embracing many historical curiosities from across the globe. The mysterious band could be described ‘electrified tribalism’ and, while their aptly named debut World Music was hailed one of the best albums of 2012, unless you have seen them live, you can't comprehend quite how unique they really are.....

SWX is Bristol’s newest venue, and is absolutely bursting at the seams tonight. A homemade GOAT figurine is held aloft in the crowd, and the atmosphere is like little else seen in the city this year. It’s for good reason too – a consistent highlight of the festival season for the last four years, the Swedish seven-piece have now produced three albums of their tribal-tinged psychedelica, each more impressive than the last.

Despite the triumph of latest album Requiem, it’s the band’s live show which gets them the most plaudits, and tonight unequivocally shows why. From the off, GOAT make every song feel like a fists-up rock show and a head-bowed techno rave simultaneously, and once the crowd figure out exactly what’s going on up on stage, their reaction is wild.