Teeth of the Sea - Orphaned by the Ocean vinyl release 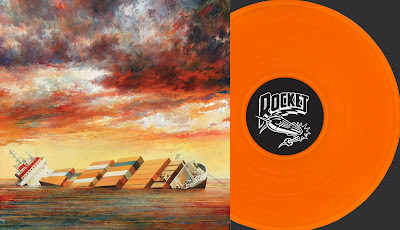 Teeth of the Sea - Orphaned By The Ocean

Rocket Recordings are proud to announce the release of Teeth of the Sea’s debut album for the very first time on vinyl.

‘Orphaned By The Ocean’ released in January 2009, chronicles the earliest days of Teeth of the Sea, now on the verge of releasing their third album, Summer 2013’s imperious ‘Master’. Recorded largely at Dropout Studios in Camberwell, by South London underground legend Tim Cedar (Part Chimp/Penthouse/Ligament) it was the culmination of two and a half years of eardrum-shredding basement practices, premium lager and a reckless pursuit of an experimental mindset at all costs.

Inspired and invigorated by shows and records by the likes of Boredoms, Comets On Fire, Lightning Bolt, Wolf Eyes and Black Dice, yet utilizing a sphere of reference that went far beyond the standard touchstones of the underground circles of the period, the four-piece lineup of Sam Barton, Mike Bourne, John Hirst and Jimmy Martin arrived at a turbulent, fiery brew that encompassed melodramatic giallo soundscapes, mariachi melancholia and kraut-tinged droning occultism.

Haunting and alternately menacing and elegiac, the singular atmosphere of this album resonated powerfully in tandem with John Ball’s eerily impressive artwork (characterized by the artist himself as ‘Turner meets Ghostbusters’). Orphaned by the Ocean, a far-reaching travelogue boasting an embarrassment of riches in texture, atmosphere and bloody-minded amplified overload alike, was the first stop along the road to oblivion for Teeth Of The Sea, and the last for John Hirst, who would leave the band shortly afterwards to be replaced by Mat Colegate.

The band may never make another record like this one, and the unique position it holds both in the band’s collective headspace and their history makes this reissue, on glorious Burnt Umber vinyl, one to savour for fans and new initiates alike.

Visit the rocketrecordings shop to check for pre-orders and current stock. Please note the Teeth of the Sea vinyls are not back from manufacturing quite yet.