GNOD and Hills LPs out today 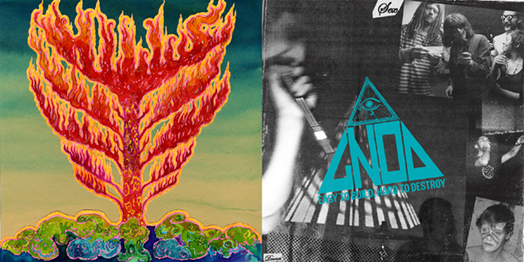 After many manufacturing delays we are happy to say that GNOD's 'Easy to Build, Hard to Destroy' and the reissue of Hills – Frid are released to day on vinyl and CD from your local record shops.
GNOD – Easy To Build, Hard To Destroy’
A 2LP/CD compilation of tricky-to-find, obscure and unreleased material from the heady early days of the band, all released on vinyl for the first time is finally out on sale today.
Watch the retina burning video above created by Rocket's John O'Carroll for the previously unreleased track 'They Live' – a just shy of 10 minute psych-out that marries the droned repetition of Spacemen 3 and the punk urgency of early Stooges.
You Tube
'Easy To Build, Hard To Destroy' can be ordered from all good record shops as ltd edition 2LP versions on 'Blue' and 'Black' vinyl. All versions come in a gatefold sleeve.
"...the GNOD that are totally fucking up for it and just don’t want to let go… BY COMPLETELY FUCKING LETTING GO!"
-
HILLS - ‘Frid' (Re-Issue)
After the huge demand for the Hills 'Frid' repress (one of the finest psych bands to come out of Sweden) we're are finally releasing the new limited gatefold version.
The repress is out on sale available on 'Blue' vinyl (400 copies) via your local record shop & a new run of CDs which is also be available too.
Hills are part of a rich scene from Sweden which also including friends and Rocket Recordings label mates Goat, Josefin Öhrn + The Liberation, Flowers Must Die, Och etc . This collection form the new chapter in a tradition of Swedish psychedelia that found its origins in late-'60s and early 70's freakouts and mind-melts by the likes of Baby Grandmothers and Älgarnas Trädgōrd - not to mention the unholy trinity of Pärson Sound, International Harvester and Träd Gräs och Stenar - before being developed by the likes of The Spacious Mind and Dungen in the last two decades. These inspirations make their mark on 'Frid' by journeying inward, via mantric repetition and hip-shaking pulsations as on the ten-minute monolith, ' Och Solen Sankte Sig Rod', yet they can also lurch into the unknown via the fuzz/wah odysseys of the aptly monikered 'National Drone' and the ceremonial exhortations of the closing 'Death Will Find A Way.'
Frid has been out of print for several years now, so this gives fans and the curious the chance to immerse themselves in this wonderful and classic album.
-
Again, we apologise these have taken so long to be released after the initial presale, we have found it as frustrating as I am sure you have.
But glad you can now enjoy them!
---