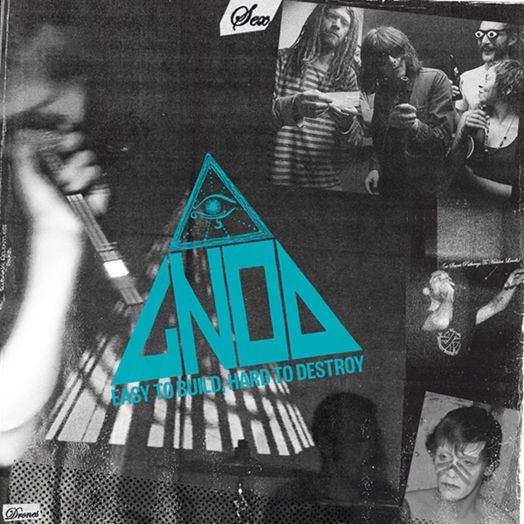 In their various incarnations, iterations and configurations, Gnod [pictured, top] have been blowing minds and amps since 2006. Easy To Build, Hard To Destroy harks back to those early days, gathering together material from before they were the house band at the Islington Mill in their native Salford or had begun their occasional forays into electronic territory.

In the words of sometime member Alex Macarte, quoted in Harry Sword’s superlative history of drone Monolithic Undertow, Gnod’s specialism is “essentially trance music”. That much is amply exemplified here in the form of everything from mantric Eastern grooves (Elka and Frostbitten, which bookend the album) to impeccably relentless Stooges vs Can psych rock (Inner Z and They Live), lumbering, frazzled doom (5th Sun) and total, uncompromising, far-out headfuckery (both parts of Deadbeatdisco!!!).

Shrouded in joss-stick smoke and speaker steam, simultaneously minimalist and maximalist, Gnod’ll take your face to another dimension. Pay close attention – if you weren’t doing so already.