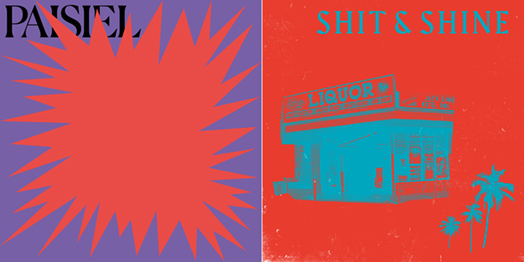 PAISIEL – UNCONSCIOUS DEATH WISHES
Drumming sensation João Pais Filipe has already helped serve up one of your scribe’s favourite releases of this otherwise Annus Horriblis, namely Faca de Fogo with the (al)mighty Gnod (Terrascope Reviews for July 2020), and which currently occupies a place up in the nosebleeds on this year’s personal Best of the Worst of Years list. Well he’s in danger of pulling it off again on the strength of this latest corker, this time with saxophonist Julius Gabriel as Paisiel; elements of their respective names making up the band title and which also means something about a guardian angel – goodness knows we’re in need of one these days...

$HIT AND $HINE – MALIBU LIQUOR STORE
Listening to the prodigious and prolific Craig Clouse’s twisted brand of uneasy listening often feels like you’re sitting on the razor’s edge seat of a particularly uncomfortable racing bike with dodgy brakes and pointing down a sharp screed slope. His latest Rocket release (they and Riot Season appear to have shared custody of the Texan’s UK output) Malibu Liquor Store is akin to one of those American road trip documentaries voiced by the likes of Rich Hall, but one that’s available only on subscription (the price being your soul) via the murky recesses of the dark web. Speak fiend and enter...

Read the rest of both reviews here: Terrascope