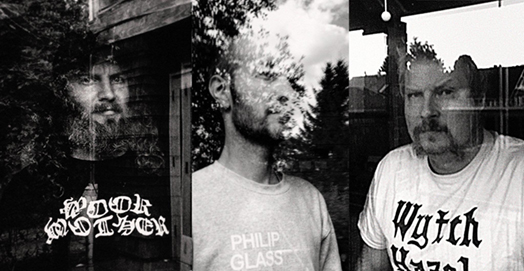 Pharaoh Overlord have just released their brilliant new album 6, a record which marries the bands synth led soundscapes with the vocals of guest singer Aaron Turner. Gavin Brown had a chat with the band to hear how this collaboration happened and their shared musical history with Aaron (featuring a contribution from the man himself) as well as musical highlights, touring with Sleep and what several of the band’s other group Circle are up to next.

E&D: Your new album 6 is out very soon. How did the recording and creation of the album go?

PO: Most music on the album was made in January 2020. We wanted to have the album released for our tour with OM in May, and we had only one weekend to record it. Jussi had made some demos and based on those we recorded and produced the material. We had the album almost ready when the pandemic started to hit and our tour got cancelled. After this we had no hurry and we decided to make some adjustments to it, made the instrumental part ready and then asked Aaron to make some vocals for some songs. Aaron got inspired by the material and ended up making all the songs, and that’s when the album found its final shape.

E&D: Where did the idea of working with Aaron Turner on this Pharaoh Overlord album come from in the first place?

PO: We got Aaron to feature on the previous album 5, and wanted to collaborate with him again.

E&D: You worked with Aaron, Faith Coloccia and Nate Newton in Split Cranium. How was it working on that?...