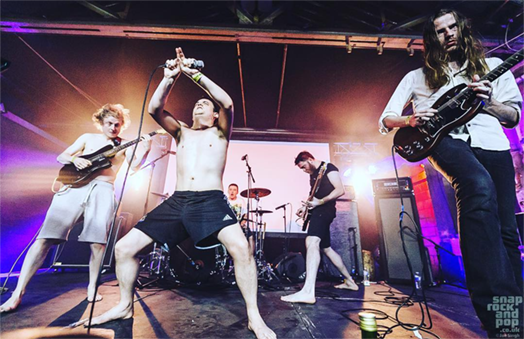 Kuro Maga
Kuro Maga are all about the drone. Their main elements are a saxophone and violin with which they build up their sound and then unleash it. It is in essence a freeform jazz improv session which if you can’t do at Supersonic you can’t do anywhere. It’s a huge meshing merging of music that works really well. Single elements spring out at you as the sound moves only to disappear again into the meld. They then swing it around to a frenzied off the wall drum beat that with the rest of the sound turns it all frenzied and raw.

Pigs Pigs Pigs Pigs Pigs Pigs Pigs
Pigs Pigs Pigs who are busy handing drinks out to the audience. They are so young.Supersonic_17062017_Fighting-Boredom-23 Dressed down, in two cases just pairs of shorts, but utterly focused. They start with just a riot of noise which moves into hard as nails punk, slow and epic sounding. The vocalist looks consumed with rage as he and the band take up every square inch of the stage. It’s so loud that my whole body is vibrating. I am sold.

It brings to mind the Rollins Band with it’s massive sounding punk, the post hardcore feel and concrete solid punches certainly reflect that but they have taken it a stage further, that band was all about the vocalist, Pigs Pigs Pigs Pigs Pigs Pigs Pigs are all about the band dynamic, the way that they move around each other and the sheer rage in the sound almost make you take a step back. The vocalist looks like he’s going to punch the whole crowd out.

They play another great big slab of hatred grinding out to break us and the crowd are responding in kind, there’s a slight stoner psych edge to it but mostly it’s good focused anger and there’s nothing wrong with that. When they speak they have broad Geordie accents and introduce their new drummer, I can’t believe that this was his introduction, talk about sink or swim, that they were spoiled playing on the other air conditioned stage and about just how hot it is in the room.
A great little band that should really get much bigger.

Pigs Pigs Pigs Pigs Pigs Pigs Pigs
The madness continues with Pigs x7. The room feels like a sauna and our bodies are dripping with sweat. The British psychedelic stoner metal outfit brings punk attitude on stage. Matt Baty howls and dances half naked bringing brooding intensity. The further Pigs x7 go the more righteous they become, and the room — boiling and vibrating. Playing with an occult self-possession, Britons deliver a crowd-moving performance. Stoner has never felt so brutal!