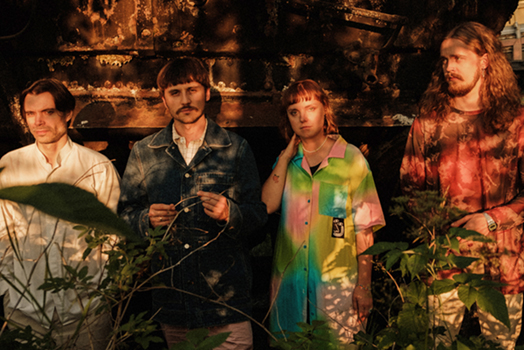 We are ecstatic to be able to bring you the news that your favourite Russian four piece Gnoomes have announced that they will be releasing their fourth album called 'Ax Ox' on 3rd March.

Watch the hallucinogenic video for the first single to be released, the dance-floor driven 'Loops' via the link below. The video (one that the 'Butthole Surfers' would have been proud of) was directed by the talented Perm based artist Baadwrk:

'Ax Ox' is available on ltd edition 'Blue Swirl' via the Bandcamp link below, or you can pick it up the ltd 'Oxblood Vinyl' from your favourite record shop:

As musicians across the world have watched the last decade systematically eating away at the infrastructure by which they pursue their art, triumphs against adversity have sometimes entered the realm of cliche .Yet few bands have undergone quite the travails that Perm, Russia’s Gnoomes have on the road to the release of their fourth release on Rocket Recordings, Ax Ox.

From such traumatic circumstances, with the band having overcome the stress of a pandemic, illness, depression and serious turmoil in their home country to reach a point where they can offer their music to the world, have arrived a kaleidoscopic and questing vision shot through with potent melancholia and strident optimism.

Ax Ox runs through a gamut of vibrant emotion across its eleven tracks, from the elemental blast of kraut-pop that is ‘The Neighbour’ to the crystalline and techno-fied ‘Loops’, and across moments of jarring and skewed ambience such as ‘Mirror’ and ‘The Bridge’. Here the component parts that have always made up Gnoomes’ fresh and wide-eyed aesthetic - dreampop radiance, bold electronic experimentation and the propulsive motorik drive which moves them onward –are rendered still more vivid and transcendent, the product of a band unafraid to cross boundaries in pursuit of catharsis by any means necessary, and one still hopeful in spite of all that fate can throw at them.

This album also chronicles a fractious relationship which the band have with their home country -on the one hand, this is perhaps their most explicitly Russian album to date, and the first one in which they’ve sung in their native tongue - a decision they made as a means of supporting a rapidly evolving and inspiring scene in Russia. “Feeling yourself as a part of something bigger is a great inspiration. That’s why the intention to sing in Russian was very organic. We saw that our audience is getting older with us and our music could have had more connections with these people, if we sing in Russian” says the band’s Sasha Piankov.

“The last five years before the pandemic are considered to be the golden times for our music community” he adds “It was a beautiful embryo, which could grow into a very interesting creature, but it was simply killed by the stupid plans of the particular people. Many artists have already spoken out, and they’re not supporting this senseless war, but they get quickly shut up by the government.The list of artists who are not allowed to play in Russia anymore is growing up every day. It’s very painful to watch this process unfolding in front of our eyes”.

As with many other Russian artists and musicians, Sasha and his wife Masha Piankova have both been forced to leave the country when mobilisation was announced in pursuit of safety, but this album still bears the hallmarks of an album influenced by the very specific experience of living in Russia in the last three decades. “In our opinion this album could be a psychedelic musical about growing up and living in the Post Soviet Russia” relates Sasha “If you watched(Adam Curtis’ documentary series) Traumazone, it’s not complicated really to imagine the visual part of the musical!”

Ax Ox ultimately reflects something of an odyssey for a complex and inhospitable modern era, and perhaps the centrepiece of the record - the moment which most sums up the continuum reflected inits heartfelt yet pragmatic nature - is the uplifting kosmische travelogue of ‘Eternal Trans Siberian’.As Sasha points out, this has become “some sort of manifesto, pretty much inspired by Stereolab. It’s a metaphor of what’s going on to our country. It feels like we’re traveling on a rusty and wrecked train through space and time. The epochs change, but the problems stay the same and we don’t know how it’s possible, but the train is still moving”.

Gnoomes have announced a series of live dates, with more to come that can't be announced just yet: