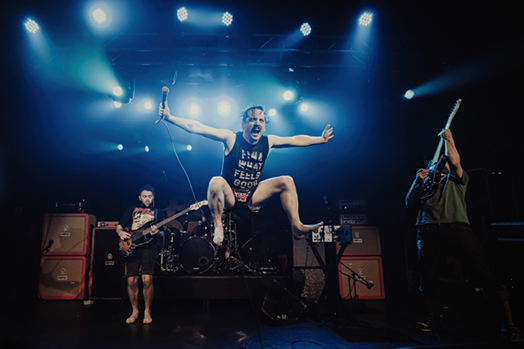 It’s in Matt Batty’s roar as he delivers lyrics about everything from self-esteem to religion. It’s in the brutal tectonic riffs laid down by guitarists Sam Grant and Adam Sykes in Black Sabbath-on-steroids anthems like Halloween Bolson. It’s in the unflinching rhythms of drummer Johnny Hedley and bassist Chris Morley that make the group sound like a marching herd of mastodons, right from the very opening beats of show-starter Reducer.

It’s in former drummer Batty’s unique moves – a cross between martial arts-inspired gestures and traditional Russian dance – that continue even as he steps back from the microphone to pour bottled water down his throat and over his head...

Read the rest and see the gallery of great photos here:  Louder Than War