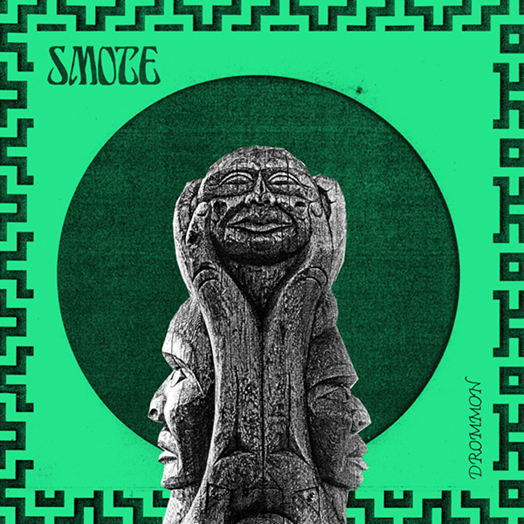 Not to be confused with the Slovakian musician of the same name or for that matter The Smoke, Smokey, Smog, or indeed Smudge, whose punsomely titled career-spanning slacker-classic  This Smudge Is True is likely to excite one or two ‘Scopic scribes, if only for the title. No, Smote is Daniel Foggin from England’s North East, described in the press blurb as an “enigmatic Newcastle-based entity”. So, not Jimmy Nail either, then. Drommon is his debut for perennial good guys, Rocket Recordings, and a second outing of 2021 following Bodkin, which was covered with no little enthusiasm on the ‘ol virtual velum back in March.

Now I remember enough from my youthful studies to know that a Dromon (one “m”) was a galley ship. Well maybe that isn’t what Foggin had in mind here but, nevertheless, there is an interesting correlation between the hypothesis as presented and what emanates from the two-part title track that bookend the proceedings. ‘Part 1’ leads with an arresting drone, one that we might once have associated with icy Nordic blasts prior to The Great Melt (deniers look away now). It soon succumbs to trademark Rocket tribal thumping, and to think that Smote isn’t even Swedish. Still, why change a tried, tested and for the most part winning formula? Vigorous, mesmeric and trancelike, it pummels remorselessly before subsiding to the sound of sloshing water. Besides not being especially kind to an ageing bladder, it nonetheless provides a perfectly pleasant coda and one that fits well with the imagined nautical theme...