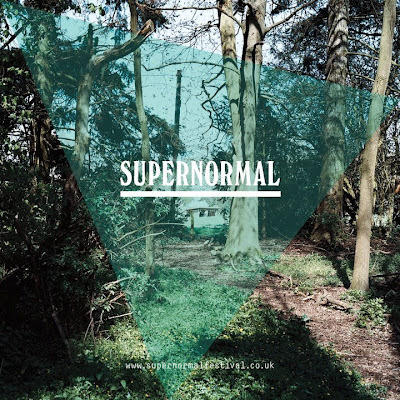 We dont usually do reviews on this blog...but Supernormal Festival is such unique and amazing experience we cant help but share the great things we saw at this years 'happening'. So here is just some 'very short' words about the bands we enjoyed: 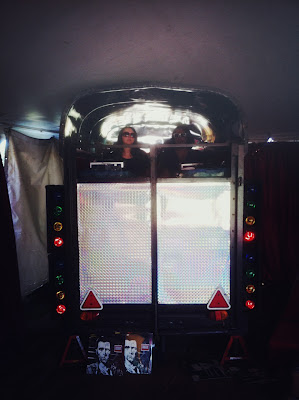 -------------
Friday
-------------
Unfortunately the first band to play on Friday was Trojan Horse, a band we wanted to see but we arrived just after they finished. So the first set we witnessed was a rare appearance outside of their home town of Portsmouth by You're Smiling Now But We'll All Turn Into Demons who played a great set of their stoned bluesy psych. (you can buy their latest ep on the amazing Cardinal Fuzz here). Next up was a DJ set by Thought Forms (as shown in horse box DJ booth) who played some great tunes including the Goatman 7".
Next band we saw was Joey Fat, a band we know nothing about, but did quite enjoy their Fall inspired repetition. Then came three droned out psych raga's from Sylvester Angfang II to soundtrack the sunset, but the headline slot went to stoner doomers Ramesses, who finished the day with a good set of heavy'ness. 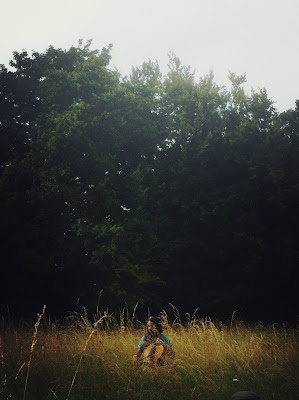 -------------
Saturday
-------------
Saturday started with the King Crimson prog of Anta who started the day with a great set. Kogumaza also played a great set, their kraut rock inspired space rock resonated all over the site working perfectly in the sunny weather. We then wandered down to the house and saw a fantastic set by Team Sports, who's three members played dotted around in the long grass in front of the house, a lovely setting for some lovely subtle improv.
The came the ultra heavy Hey Colossus, who's current line features Jon from The Notorious Hi-Fi Killers and Tim from Part Chimp. After that we moved straight up to the dance tent and watched Black Tempest's Space Opera, which was saw BT expand into a costumed kosmiche three piece which was like Michael Moorcock, Edgar Froese and Jeff Wayne all together, it had to be seen to be believed. The day ended with 'maybe' our favourite set at the Festival and that came from Blurt. Ted Milton fronted the three piece and created an amazing repetitive psych-punk that got everyone dancing and the band really looked like they were enjoying themselves as much as the crowd. 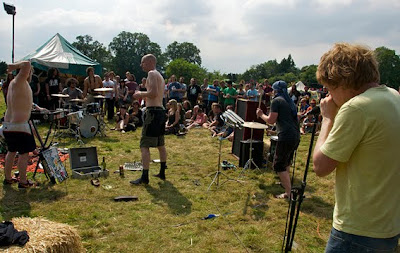 -------------
Sunday
-------------
The past two years this has been the weakest day for the music, but this year it was the stongest. And what a better way to start than with Sly and the Family Drone, who set up on the grass in front of the second stage and did an amazing hour long piece of percussion and noise. While constantly encouraging the large crowd to join in with them on drums and cymbals handed out by the band. Straight after them was a band we didn't know called Sweeet Williams, who's set we really enjoyed, laid back slomo rock, that had a bit of Earth to them, but a lot warmer sounding.
Then we had four back to back great bands starting with The Cosmic Dead, whose energetic space rock was perfect for the sunny afternoon. Following them was the the dual fuzz wah of One Unique Signal, they owe a lot to Spacemen 3 and The Heads, but they do hit some great moments of their own. Then came Queer'd Science, a frenetic three piece from Manchester centered around the amazing drumming of ex Gnod sticksman Del. Their set was truly fantastic and got the crowd up on their feet dancing to their repetitive kraut-punk-disco grooves. The last band we saw we knew nothing about, they were called The Family Elan, a three piece of drum, bass and a guy who played bouzouki and saz through some heavy fuzz and wah pedals, that created great psyched out greek and turkish folk/dance songs, really good and makes us wanna check out a record by them.
Before leaving we enjoyed a great DJ set by Jase from Mugstar but we had to leave just before he finished. That meant we missed Fairhorns and Seefeel which was a real shame as by all accounts we missed two more great performances.
So, again, another great year...that was just a few words about the music, there was loads of great art and performance art all over the festival, and like before is full of great people.
So thanks again to all involved in making Supernormal happen, it is a unique festival and has become one of the most looked forward to weekends of the year...bring on 2013!! 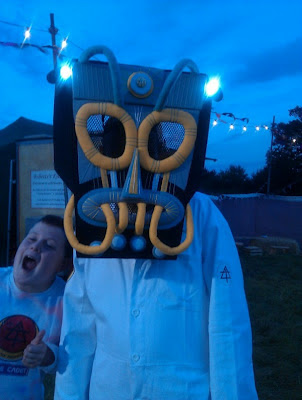