SIENA BARNES: THE CITY MADE ME DO IT (Music by Jimmy Martin - Teeth of the Sea) 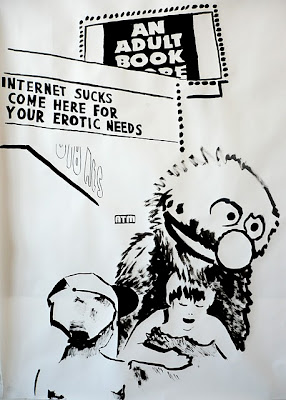 THE CITY MADE ME DO IT

This is the dialogue of dissolution. A howl of feedback, looped through surface and loss. We are the city, subsumed in endless binary. Outsiders and deep insiders, the city will decay and flourish.

THIS IS THE GATE OF HEAVEN

In a parallel dimension, gossip is gospel. Horror-movie scientists and austere librarians search for solace. Stranded between global fame and eternal damnation, in the nocturnal orange glow. Increasingly worthless plastic is obsessively chronicled.

Subterranean freesheets adrift on discarded networks, alive with the tensions of an electric fence. In the dehiscence of an incoming storm, light radiates special offers, appetites and egos. We are the city. Of complicity and chance encounters, rising from the wreckage of a year once impossibly futuristic. Of unseen forces behind the firewall. Of imperious billboards and empty monoliths of illusion, bathing in screenlight and left to rot.

PV: Thursday, 17 March 2011, 6pm-8pm at Exterior, Builders Cladding, Redchurch Street at Brick Lane, opposite the back of Rich Mix, London, E2. Exhibition continues until the work is destroyed or removed.