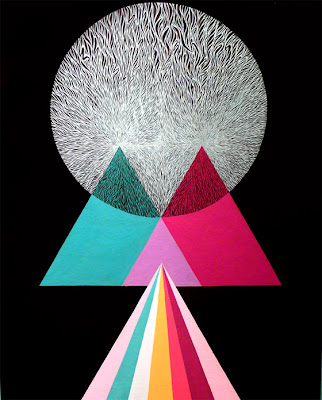 Really nice live review of Teeth Of The Sea's recent show in Manchester, part of the their tour supporting British Sea Power.
Read the full review here
They have also written some nice words about Your Mercury:
Teeth of the Sea – Your Mercury
(Rocket Recordings)
To enter the world of London quartet, Teeth of the Sea is not a decision to be taken lightly. It requires patience, commitment and ultimately a musically open mind. In traditional lyrical compositions, the writer pushes his (or her) thoughts and emotions onto you, which may or may not be relevant to your own circumstances. “Your Mercury” however creates instrumental soundscapes that allows your mind to take over and drift to wherever you want this glorious noise to take you.

It's almost impossible to take in everything on offer in this body of work in one or two listens, which is where the patience is required. Initially sounding akin to an unholy racket, the melodies and hooks are there, they just need to be carefully unravelled. Opening track “Transfinite” lulls you into a false sense of atmospheric, serene security before the squally, feedback drenched “The Ambassodor” kicks in to reveal the true nature of the album. This is an uncompromising piece with simple rhythms providing a backdrop to guitars and keyboards, which shoot off at tangents, creating a psychedelic nirvana.

There are reference points, especially early 70's prog rock and “Cemetry Magus” has elements of Pink Floyds “On the Run” within the vocal samples and initial keyboards and I also hear particles of Tangerine Dream and Mogwai, but these are literally just tiny snippets in an incredibly fresh and exciting sound.

Stand out tracks are A.C.R.O.N.Y.M, with it's Vangelis like intro, and stunning guitar that builds and builds until it hits full rock out mode. “You're Mercury” employs melodic brass to create an ambient vibe before it's drowned out, once again, by guitar dragged from the depths of hell and last track “Hovis Coil” is once again brass based, but with an ending that is so sudden and unexpected. It’s as if the band have reached the point where you’ve been privileged enough to be allowed into their world and now it’s time for you to leave, with the door slammed shut behind.

The journey into the Teeth of the Sea is turbulent and tempestuous, but in the eye of the storm, it can also be tranquil and serene. Beware however, as just below the surface is an evil just waiting to surface when you least expect it. I doubt however that once in, you'll be in any hurry to return to the safety of the shore.
--