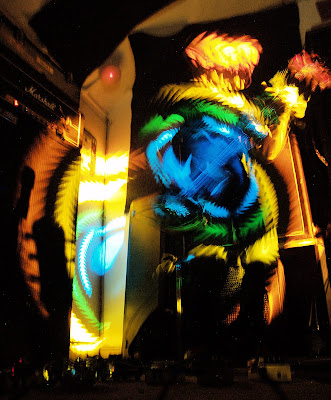 Your music has shifted gear over the years, gone from the less garage songs of Relaxing to more drawn out almost abstract, what influenced this shift?

‘Relaxing With’ and the singles before was us trying to be more commercial to some extent. We realised, or thought, to be taken seriously, releasing records and getting airplay we had to make our tracks 3-4 minutes long. People said no one will ever listen to a 15 mins track and I suppose when you first start out you’ve got to try and encapsulate every aspect of the band in to a succinct 3 mins soundbite. We had initially began with the first line up playing 10 minute jams based around a couple of riffs, obviously very self indulgent but we figured other freaks and heads would get what we were on about. Coogan’s, the last track on Relaxer gave the listener an idea that we could go for extended jams. And yes you’re right Relaxer is more a garage rock album.

After ‘Relaxer’ we had a few more ‘ commercial’ type singles, ‘Spliff Riff’ was brought back as frenetic jam at the end of the live set. Then with ‘Everybody’ we had the opportunity to make a double album and also decided to use our budget on buying our own rudimentary recording equipment so we didn’t have the constraints of only having a week in the studio, hence the long wait between the two albums. Recordings were more lo-fi but mixed in with conventional 3-4 minute tracks we were able to use live jam recordings. These live improv’s captured the spontaneity of us playing, hitting off each other which only comes after playing together for a few years, intuitively knowing when each member is going to change and take the jam into a different direction. So in a way ‘Everybody’ was a return to what we really had set out to do. It was only possible once we had settled down in our present line up. Some people got it, most didn’t.

You’ve also got to remember we’re avid music fans always on the look out of new ideas and sounds. Touring the ‘Relaxer’ album we got to meet lots of music types who introduced us to many varied genres. Exploring the rich vein of Kraut and Jap rock, taking on board more ethereal sounds of field recordings and soundtracks, going back to more classic rock, enjoying leftfield electronica and even getting to grips with spiritual jazz. All these influences helped to shape the next direction we took, away from the predominant garage rock sound of ‘Relaxer’. 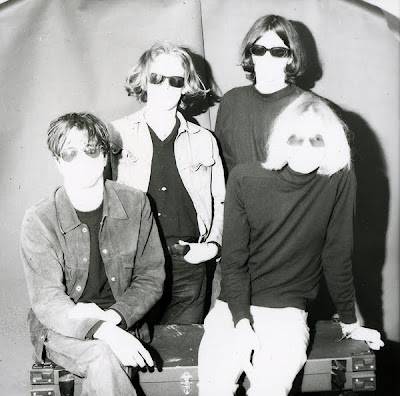 Some off your best versions of tracks I’ve heard are just jams recorded without the intention of capturing them for the public. These recordings often while running through your set list or just improvising in the practice room. Its like its just for your own pleasure & the best version of the band is never to be heard in public, why retreat to the practice space rather than play out live?

I’m not sure what you’re trying to get at in this question, are you insinuating we’re lazy or selfish ? Perhaps we are but there are quite a few reasons that the best versions will never be heard in public.

In the small practice room which you’ve sat in for a few times you can get a really intense sound which is near impossible to recreate in a live venue or professional studio. We each feed off this intensity. Admittedly when we’ve done a tour and have got more comfortable being on stage it’s easier to take risks when we’re all confident in our surroundings. Unfortunately we rarely do tours and more than likely only play one off’s when we do play.

Also improvisation means it’s off the cuff, never to be repeated and if it’s not recorded it’ll only be us that’ll ever experience it. Often we’ll jam, come up with something, try to play it again and the initial spark of creating something on the spot had has gone. The second run through often sounding bad so we never return to them. We do have tracks like KRT 5-1, Heavy C, #’75 and several others which’ll appear in our live sets from time to time but will vary greatly each time they’re played even if we do them on consecutive nights.

We try to record every rehearsal even if the levels are way out and make it unusable it’s something we can refer to at a later date. However if the recordings good and it doesn’t metamorph into a ‘proper’ track, generally it will appear on a recording somewhere down the line.

I think I can understand what you’re saying but would you expect a visual artist, like say Pollock for example ( abstract and chaotic, bit like us, yeah I know punching well above our weight here ). Would you expect Pollock to recreate the exact same picture over and over again ? His canvas is like our recording, captures a moment in time. You can create a variation or continue the theme but you’ll never be able to recreate an exact version. 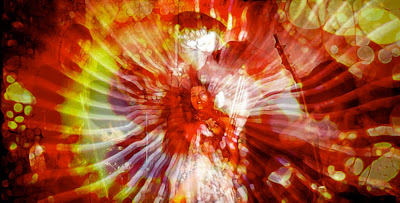 Who finishes last in the battle to squeeze the last of sounds from your instruments at the end of a long freak-out jam?

We all try to but if it gets stupid I turn my mini disc recorder off as it’s a waste of time if you ask me. Usually it’s between Simon and Paul, having said that i’m just as bad. When Wayne did a ‘Raspberry’ at the end of one jam that sums up my attitude towards ‘ Squeezing ‘ those last sounds out. 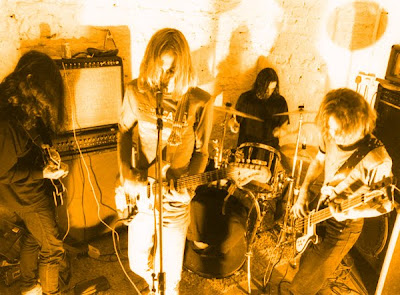 Nowadays you are lumped into the Stoner Rock scene which you weren’t really a part of, bar Black Sabbath, there probably isn’t that much ‘Stoner Rock’ we go for as a label, why has that become a tag that has followed you, especially when you go beyond the riff thing?

Relaxer being more song based I suppose could be considered ‘ Stoner’, especially with the naked lady, bong sleeve artwork, which I think Kozik tried to recreate and update to the 90’s with the Fu Manchu Godzilla sleeve. Add to that the German Stoner compilation we were on with other like minded bands. It’s just a broad out dated tag, it doesn’t really bother us. At the end of the day we’ve all been stoners.

Now that the stoner scene has died down and splintered into many different directions we’re more referred to as heavy psychedelia,which better describes our music. Although when we first started out we considered ourselves more Cock Rock. 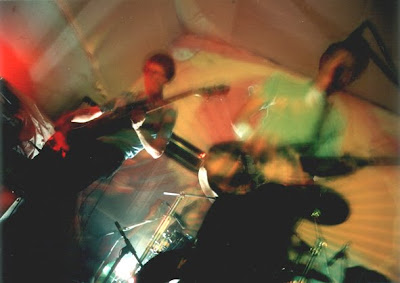 Why didn’t you get to Geffen when they showed interest & contacted you from NY back in August 1996?

You’d better ask Keeler about that. I can remember getting the letter sent to Replay and Pricey opening it and us all getting very excited about the prospect of getting signed to Geffen. We passed it onto Keeler and he dealt with them. Don’t forget though we were on Headhunter UK and Headhunter in the States had the early Blink 182 albums. I can just see MTV coming round to the Heads crib at Richmond road and not entering the house due to the filth inside.

Anyway in retrospect though I wouldn’t have thought a major label would release ‘ Everybody’, even though Geffen had released Sonic Youth’s Goo they wouldn’t gone for the lo-fi ness of our second album. We’d have probably got a development deal, been given super shitty pay to play support slots, had lots of music rejected, ended owing thousands, disbanding and have no rights to our name or music. 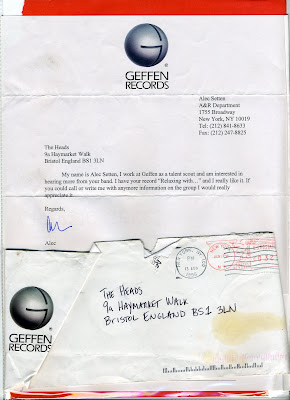 I once heard Sky Sports 2 used some Heads music in a montage, why haven’t the doors been bashed in with advertising agencies demanding Heads sell their clients products?

Question we ask ourselves. Don’t think we’ve received any money for the Sky Sports 2 usage. Publishing and music rights are very complex and unless you earn enough money from it to be able to afford to pay professionals to organise and collect it for you, you’ll see very little. Our PRS statements each quarter are usually less than a tenner.

Having said that I think if advertising weaponry was legal then I could see the flood gates open !

What scene in a film or Television would you like to see your music used for?

Don’t have any specifics but we do share a common love for soundtracks and incidental music. Taking repetition, variation and returning to a main theme in our playing. Through Simon Keeler at Forte we’re sorting out our own publishing company which’ll hopefully lead some of our music being used. Paul and Me have toyed with the idea of doing a Heads Library Mood Music album targeted towards film and television.

If there’s anyone out there interested in doing anything, it’s something we’d definitely want to have a go at.