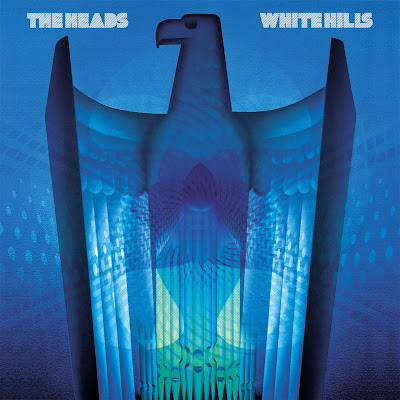 The record survey’s both bands voyage towards a single lengthy Incursion, a whole side of burnout bliss. Each track will navigate the listener to explore Rocket flight paths until he/she is gasping for time in the air lock. White Hills ‘I Will Find Peace of Mind’ traces paths explored on previous Rocket favourite Heads on Fire (Launch 029), but this time the journey expands till it kicks the dust storms into a spacerock void. The slow pulse of pounding bass and pendulums of fuzz guitar swirl like a battle against unleashed elements, lost in the bottomless depths of the cosmos. Head for the wind, dark and frozen. Finally the whole piece concludes with a field recording gradually fading out into eternity. A parallel previously harvested by the freaks of Finland in the early 70’s. (Vocal Track)

With an all together heavier payload, The Heads ‘Camden Brain Slurry’ pilots further uncharted territory. From the off, the thrust of the entire band pummel the onboard circuits until the propulsion dials are teetering in the red, until it’s eventually time to bailout in a free fall haze of fuzz and feeback. Then the fun begins. In microbursts of repetitive transmission’s The Heads signal the ether before the engines are re-fired in hypnotic thrusts of distortion, eventually suffocating you until your brain screams for release. This is when we resume our journey with The Heads marching on in a Krautrock blitz until red eyes have taken them and you have to lower your landing gear. (Instrumental)

(It has also come to our attention that the labels on the new Heads/White Hills split 12 inch have been manufactured incorrectly, they don't seem to correlate with the titles on the back of the sleeve, I'm sure fans of both bands will recognise which tracks are which)