The question we asked on a regularly is "when is there gonna to be another Goat album?"

Well that wait is finally over! The band have just announced a brand new 10 track album called 'Oh Death' which is being released on 21 October.

The first single to be released from the album is the fuzz-funk driven track 'Under No Nation' – this is what the band say about the track:

"This year Goat were invited to the Gods annual feast at the 'Round Table of Funk'. After a very wet evening, and after Goat was pretty funked up, we were handed the manuscript to 'Under No Nation', and ordered to play this divine 'funk' to the humans – as the gods felt the human spirit is in deep need to get grooving properly again!"

Watch the trippy video for 'Under No Nation' which was produced by John-Mark Lapham (with additional video feedback by John O'Carroll/John Minton) above:

Both the 'Oh Death' LP and CD comes housed in a gatefold sleeve sleeve adorned with eye-popping artwork.

The LP is available to preorder on 'Psych Splatter' vinyl from the link below – once they have sold out there will be a Ltd 'Harmonious Green' vinyl version on sale:

And finally, our good friends over at Levitation have their own exclusive version too – so US fans should snap them up fast:

Formidable psychic warriors, channelers of the mystic and proponents of a spiritual quest that transcends this realm, Goat remain a band shrouded in mystery. Travelling from their inscrutable origins in the Swedish village of Korpilombo across the stages and festivals of the world in the last decade, this band has created their incendiary music entirely according to their own co-ordinates, and conducted their affairs strictly by their own code.

With all this in mind, the casual observer might have guessed from its title that ‘Requiem’, their beatific and melancholic album of 2016, was to be their last. Yet things are never that predictable in the world of Goat, and the ancestral spirits summoned by their art are always restless. Thus the eternal cycles of rebirth have triumphantly produced ‘Oh Death’ - a ceremonial conflagration as powerful as any this band has made.

Invigorated by forces we can only guess at the origins of, ’Oh Death’ is a party to which all are welcome. Blithely waving away easy classification, these heat-hazed serenades are just as comfortable in the headspace of vicious ‘70s funk as they are in zesty ZE records post-punk. Folk-haunted incantations and free jazz skronk here find common ground, buoyed by relentless forward motion and raucous energy.

All of the above is locked into a delirious gnostic groove that threatens to throw the whole shebang spiraling into orbit. This is an auditory realm where seemingly anything can happen, and the uplifting incandescence of ‘Oh Death’ only multiplies in potency by taking in Thin Lizzy-style twin guitar harmonies (‘Blow The Horns’) a fearless-to-ridicule Antmusic stomp (‘Do The Dance’) and Eddie Hazel style paintstripping fuzz/wah (the opening ‘Soon You Die’) along the way.

Yet amidst this cornucopia of delights, this record sounds like no one else but Goat. Evangelical elan does battle with reckless insouciance, Vocal mantras form righteous calls to arms amidst the dancefloor-friendly fury. Yet whilst dealing in the desert-blues drift of 'Passes Like Clouds' or the Tom Tom Club-esque global rhythms of 'Remind Yourself', 'Oh Death' is driven by a supernatural charge that unifies, invigorates and transcends borders, whether geographical, musical, or between this world and the next.

In the hands of these sages and soothsayers, this is just the beginning. Goat Is ‘Oh Death’, Long Live Goat.

See GOAT perform at one of their legendary high octane shows: 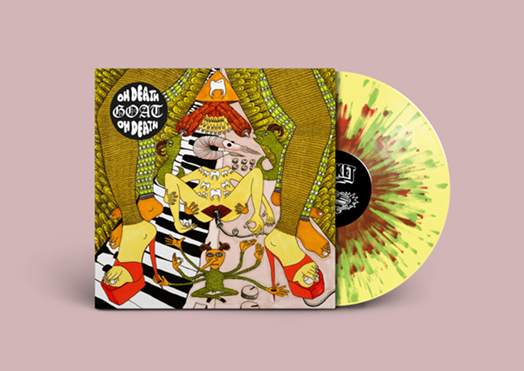