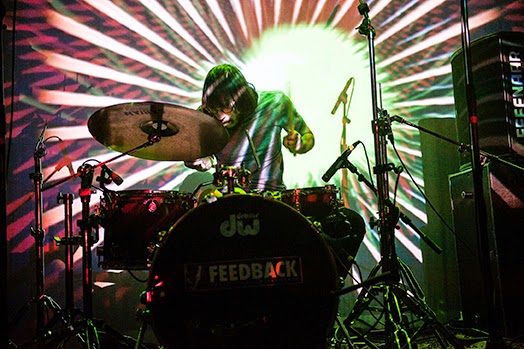 Here is a 'google translation' of a great review of Lay Llamas recent performance at Dio Fest:

The purple flame kundalinica that winds sinuously between the stills of strings, cymbals, keyboards, synthesizers and vocals to an impressive first feature which Ostro, live burning of pulsations and new colors, adrenaline surge is not noticeable in the recordings worked in the studio, at least not in this - while dreaming - epidermal shape and direct, innervated by the frontal stage to the dynamics of their live performances, that 'fateful' molecular shock wave that shatters on the muscles and neurons of the onlookers thrown into the vortex center vibrational . Although subject to tight schedules of the contest headed by the three-day festival of DIO Fest!,

The performance of the Lay Llamas has not struggled to gain altitude on the launch pad of the host club (space 211), attracting our attention for 40 minutes of exciting performance, framed as a pagan ceremonial offices tribal-psychedelic perfectly consistent indications topics on the agenda of the second day under the sign 60's 00's Psych Vs Occult. In other words, the young band led by Nicola Giunta and Gioele Valenti has centered coordinates and purpose of the event with nothing disperse, maximizing short period of time had bequeathed available in terms of a performance contagious and powerful, designed to be accomplished in a sequence philological of key moments. To open the dances is the mesmeric Overmind, introduced by a wavering plot of telepathic spiral joints and the phonetic records of interplanetary communication soon overwhelmed by the space-time raids Archaic Revival, a sort of proto-pawl cosmic or, if you prefer, locomotive psychic hounded by massive scans of bacteriology slap concentric and full of syncopation drumming set the metronome, perfect to be inoculated riff retractable abysmal electronic sci-fi delusions and singing by the lapels magic-sublimatory.

What takes shape on the screen of the mind is a kaleidoscope of colors exploded, shock to subtle energies and frequencies onnipervasive intended to give rise to streams of consciousness coming to the transfer of the projection lysergic sound. Impression soon renewed by the harmonics of the magnetic hologram Desert Of Lost Souls, anatomies of spirits dancing on live rock canyon sidereal and ellipses of melodies-legendary comet, traveled by the vibrato of the strings and gravitational arrows keys mercurial. A mold geometries and funk aftertaste Mediterranean Something Wrong eurhythmies are the kinetics of ethno-section and pizzicato bass-drums rhythm of electrified ideal metric theorem ambrosial scents rising from the semantic clearances of Joel singing.

The grand finale is left to trace the symbol of the circle Lay Llamas, whose title, We Are You, par rise as code propitiatory mantra, which knowingly miraculous formula repeated in the course of work, magnified by the pyramids zenith electric guitars, shamanic drums and bursts of laser-cluster intermittently for the last tantra hypnotic around the fire for a solstice party (remember that we are to 21 June) at the height of his career alchemy, as epiphanies of astral conjunctions and stellar vocals that vibrate with the voices of 'soul. A thrilling concert.

You can read the review properly in Italian here: Rockerilla