An interview with Goat 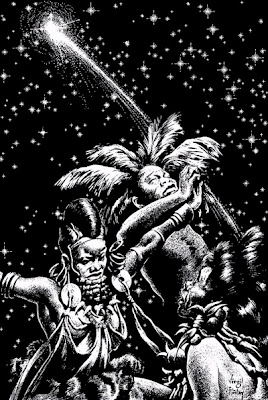 You can see the interview here

Or here is a 'very roughly' translated version:

How would you best describe your music?

Totally unknown in Gothenburg but awesome response outside of Sweden, are you surprised by the response?

We made music without any goals or preconceptions. Simply out of a spiritual need. Suddenly we are releasing records and have requests from around the world basically without us lifting a finger, so yes we are surprised of the fact that there seems to be such a need for what we do among people. It´s very humbling/ fun but not without problems. But we like very much what we do so in that sense we are not so surprised that others like it as well.
So, Gothenburg, what do you say about the local music scene? What do you add?

Gothenburg is a pretty relaxed town to operate from in the creative sense. People do what they want here to quite a high extent. But I could not tell you what we add to the scene. We do not think in that way. I think many others add more to the scene than we do.

Goat are from the little village of Korpolombolo?

Immigrants without a residence permit.

Many rumors circulate around Goat. Why so secretive?

We don´t have any need to connect our faces/ persons to our music. We think it sounds better without that connection. There are also other reasons that have to do with our heritage in the village of Korpolombolo and the religious situation there.

More secrets. There is talk about live shows, when do we get to see you in Gothenburg? And what can we expect from a Goat show?

Since we are on an English label they have kind of persuaded us to do a tour over there. If we will play Sweden in relation to that tour is not decided. Or if we´ll ever play live again after that tour. We´ve never played live so we don´t know what to expect from it our selves. But we will never appear on stage without our masks, that is essential for the music and our heritage.

Really excited about a full album, will there be one and how will it sound?
There will be an album out on Rocket Recordings this summer. It´s already done but I don´t know how to describe it to you. Rocket and others that have heard it are really enthusiastic. But I think you will have to listen to it yourself when it comes out. It could be fun to get it released in Sweden to spread the music around here as well. I kind of suspect that it would appeal appeal to people here, it is appealing to us anyway..

The Goat album will be released on Rocket in September, and the band hope to tour the UK around October, so what this space.

Apparently there are a handful of Goatman 7" left at our distro company Cargo, but these are selling fast, so if you want one, get one soon as they are not going to be around for much longer.