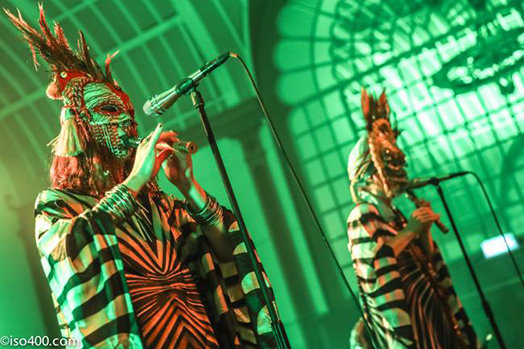 'There is a lot of hogwash surrounding this band. A lot of hokum, misinformation, propaganda, legend and myth. Who the hell are they, and where do they come from? Yeah, some of them probably play in other bands, known only to a very few. But, somehow (apart from early on when Christian Johansson, the only publicly known member of Goat, gave some interviews under that name) they have managed to keep that cloak of secrecy around them, the antithesis of reality TV and commercial pop and rock. They are underground, in more ways than one but everyone is welcome to the communal celebratory spirit of the band and it’s this underlying ethos which is part of the attraction. It feels and looks honest, and right for many.

Before Goat get started tonight though we have Josefin and The Liberation, also from the same stable, who proved to be an excellent support (making a rare appearance in the UK). They provided a more psychedelic and heavier rock show, with the ephemeral Josefin weaving her seductive vocal throughout the set. Very often support bands can fall well short of the main attraction but Josefin and the Liberation definitely wowed the audience, receiving enthusiastic responses for their often brilliant musicianship and strong material. It almost gave the impression that The Liberation could have included members of Goat, unrecognisable without their masks.'

Anonymous Swedish band Goat have denied that their gigs are intended as rituals, but it would have taken a heart of stone not to have felt spiritually invigorated by their Brighton show. Judging by the amount of people stamping their feet on the ground in demand of an encore, I wasn't the only one.

The costumed troupe are an absolute tour de force, a freewheeling but tight unit who merge various world music styles into a borderline transcendental product.

Whether it was the kraut trance of The Sun The Moon, afrobeat euphoria of new song Trouble in the Streets or the classic rock wig-out of closer Det Som Aldrig Förändras, the band were never less than enthralling.

Read the rest: The Argus

See some photos from the night here: After Dark