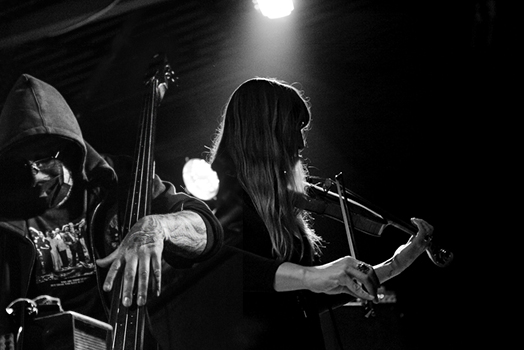 We are excited to announce that Rocket will be releasing new music by the great two piece band 'KURO'. The band feature the amplified talents of French violinist Agathe Max and Rocket regular Big Naturals/Anthroprophh Bassist Gareth Turner.

Agathe Max trained in classical music for 10 years, she graduated at the Bourgoin-Jallieu School of Music, France, in 1995. Inspired by a world both enchanting and draped in darkness, she has developed a wide range of sound textures, unique and melodious, creating unconventional and magnetic musical pieces reflecting a personality in constant search of rareness in music. She has released music with Table of Elements (Tony Conrad & Faust) and played live all over the world.

'At times her work approaches the supersonic escape velocity of Tony Conrad; elsewhere, she introduces delicate repeating threads, then  slowly weaves them into a fabric of vast, billowing sound more reminiscent of Steve Reich. With an elegant command of melody and a strident use of rhythm, Max manages to create a remarkably accessible collection of tracks, one that bridges the gaps between minimalism, post-classicism, the avant garde, krautrock, and plain old-fashioned pop. « This Silver String » is a genre-bender for certain, and a fine debut by any definition.'

(Boomkat review for This Silver String)


The line-up announced so far is: