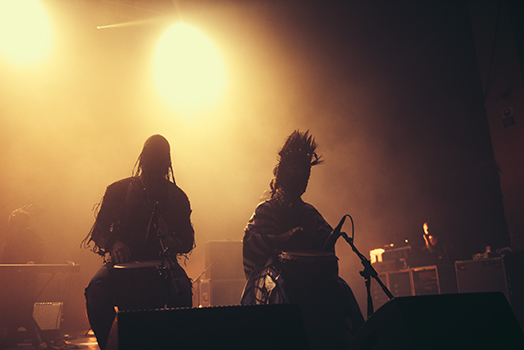 Bandcamp have published a feature 'A Dark Descent Into the Shadowy World of Horror Psychedelia' and amongst the artist they have chosen is Goat.

This is what they say:

Rock ‘n’ roll’s relationship with the occult begins with the genre’s roots. Screamin’ Jay Hawkins turned what could have been a regular blues ballad into a Halloween anthem when he recorded “I Put a Spell on You” in 1956. Before that, Robert Johnson purportedly sold his soul to the devil at a crossroads of Mississippi highways in the early ‘30s. Nearly 100 years after Johnson, horror rock still exists, and continues to evolve.

You could argue that horror psychedelia, the spawn of scary movies and distortion-driven rock ‘n’ roll, began in earnest in 1966, when Austin’s the 13th Floor Elevators released their debut album, The Psychedelic Sounds of the 13th Floor Elevators. (That band was one of the first to describe themselves as “psychedelic.”) Roky Erickson, the group’s singer and guitarist, wrote songs rife with drive-in B-movie imagery, which continued into his solo career. He released his defining record The Evil One, in 1980, following a stint in a mental institution, and its songs were full of horrors both real and fictional. By that time, Erickson’s psychedelic sound had been adapted, twisted, and mutated by acts like The Crazy World of Arthur Brown and Alice Cooper.

The founders of horror psychedelia still make music, but now stand among a sea of acolytes. Sweden’s Ghost covered Erickson and, alongside The Black Angels, brought him back to the zeitgeist. Below we’ve collected a murderer’s row of artists operating in this shadowy field.

Read who they have picked: Horror Psychedelia