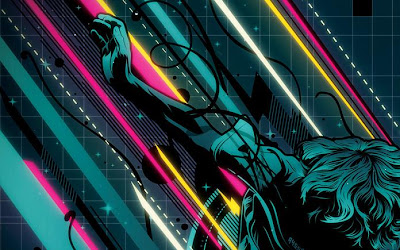 The amazing Terrascope has written a nice review of Gnod new album INGNODWETRUST which was released this week:
Manchester’s psychedelic drone collective are back following their twin- header with White Hills last year, with a two track mini-album (well by modern standards, that is) nestling twixt a cover that may well bother the God-botherers of the Roman Catholic denomination, featuring as it does a faceless representation of His Holiness bestowing blessings upon a photo montage of riot cops in head-cracking mode.

So what do we have here? Well two lengthy sonically macabre “meditations” that can be anything but easy listening but rewarding enough for those of us wired into this alternative current of industrial space rock. “Tony’s First Communion” starts with an extended single bass note which occasionally slips into a “Psycho Killer” run and the rest of the gradually builds around this. The minimalist, repetitive hammer-like beats usher in the sound of some infernal contraption being knocked out in a cosmic forge, as a kitchen sink of guitar, synth noise distorted incantations and that bass-heavy riff is manhandled into a grotesque yet oddly appealing shape. Someone somewhere is probably already using this as some sort of alternative primal scream therapy.

“Vatican” perverts, or at least distorts, the Mass and the church organ – the papal incantations evoke dub reggae, the organ invokes a mellatron, while those pounding, insistent beats begin to sound as much tribal as motorik. At one point the “church organ” seems to play the basic three chord/note run of The Stooges “I Wanna Be Your Dog” over and over again as the maelstrom lays waste to all around it..

Powerful, dystopian, energising and a wee bit scary and, if your tastes incline more towards the sunnier slopes of psychedelia or the wistfulness of avant-folk, this could seem a bit hard going at times. It certainly isn’t for the faint hearted which to my mind makes it a challenge, and we like a challenge here at the Terrascope, particularly one as fulfilling as this. (Ian Fraser)

Read the review in full here
---