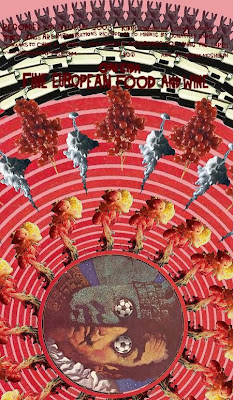 "Fine European Food And Wine" is the latest release from NYC psych rock masters, Oneida. This is tape features 2 monster improv jams... each clocking in at around 15 minutes.

Yep. . .there are 100 of ‘em and apparently the women who printed up the covers (designed by our pal Eli Lehrhoff) looks like a 21 year old Claudia Schiffer. Unfortunately (fortunately for her) she lives somewhere in Ontario. . .oh wait. . .we’ll be there shortly. . .anyway. . .if you are interested in ordering this cassette called Fine European Food and Wine. . .you can. . .here

Here’s what I wrote to Scotch Tapes about the release:

Greetings intrepid world travelers who may or may not have the blues! Oneida is a lucky band – we are probably an unlucky band as well but we won’t get into that here. Let’s dwell on our luck. Cut to: 2002. Oneida releases our vinyl only double album Each One Teach One to an indifferent public. The word trickles out. The word trickles back. Founding member Papa Crazee quits the band.* The remaining trio of Oneida wonders whether we will continue on. . .

Jagjaguwar steps in and releases this double LP onto CD and sends a copy to Italy. To this magazine called Blow Up. Blow Up is basically the Rolling Stone of Italy (so we’ve been told). The editor decides that Each One Teach One is amazing and that it is so amazing Oneida must grace the actual cover of the shit. This is the first and last time that Oneida has appeared on the cover of a magazine exclusively. I say exclusively because Plan B put a blurry photo of me on their cover once but we learned that most of the magazines they printed had The Detroit Cobras on it. Then there was this New York magazine called Ghetto Blaster. . .they put us on the back cover and misspelled our name – so that’s that.

But this Blow Up shit is for real. They put our mugs on the cover. They talk about Each One Teach One like it’s the heaviest shit ever. We know its true (check it out) but we never expected anyone to agree with us.

All of a sudden we are minor stars in Italy – well if not stars – music fans actually care about us. This is quite novel. We get flown over to Italy to do a tour. We arrive in Rome and open up for Cat Power. She was not in good shape. As the audience files into the venue – people are pointing us out and hollering at us. “Oh – neigh – da!!!!”

The energy level that’s coming off these people is extraordinary. Some of them happen to be beautiful Italian women. People recognized me on the street in Naples – and if you’ve ever been to Naples you know that might not be a great thing. But it was a great thing for us. . .it was amazing.

We got a taste of adoration and it was really fun for us.

We started off a lot of these shows with improvisations and we recorded them all onto mini disc. They languished in the vaults (a box) for the last 6 years. This label in the UK Rocket went through those shows for us and picked out a few performances that they liked but decided they did not sound good enough to release onto LP. . .and that’s where Scotch Tapes came in. . .and we appreciate it. This cassette goes out to all our fans in Italy – who have shown us the way for the last few years. Thank you Italy – we love you.