The Moles - Future Sounds of Ashton 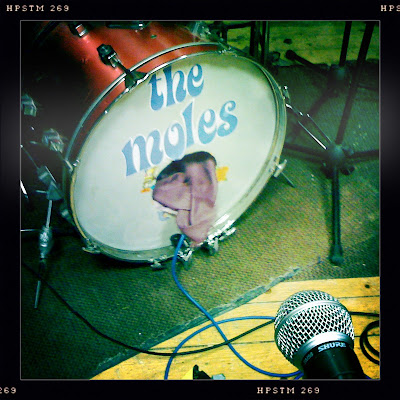 Psychedelia has always been something of an opposing force in popular music. The Beatles turned to The Book Of The Dead. The Stones loved us. The Damned moved on from punk and recorded The Black Album. When things get predictable psychedelia returns to tip over the apple cart. Brin, Billy and the gang uncannily emerge from their burrow as everything in music is getting just a tad boring and predictable. The Future Sound Of Ashton may shock those who expect a dot-to-do recreation of the ’60s though. ‘The Combined Force Of An Atom’ is as feral, urgent and angered as Blur’s ‘Chinese Bombs’. And like Damon Albarn, lyricist Mole Brin Davies fully understands the correlation between the disconnected playfulness of Syd Barret and the art school nihilism of the early punk movement. Indeed, there is something very Soft Boys about The Moles’ musical landscape; fractured imagery, nightmarish word play, distinct vocals and an evident debt to 1967 without plagiarising the source material.

Across 15 songs the group forge a distinct sound, relying on simple production rather than the everything-but-the-kitchen sink effect laden approach of the Sgt Pepper school of recording. Billy Fuller (also a member of Beak, Fuzz Against Junk and Robert Plant & The Strange Sensation… yes, ROBERT PLANT) supplies many a memorable bass line whilst Davies’ characteristic English vocals may well leave the same lasting impression as Ray Davies, Andy Partridge, Robyn Hitchcock, Howard Devoto and Jarvis Cocker… even when having explosive US garage-punk/psych edges the forlorn, upbeat, funny and sad music of The Moles is as English as fish ’n’ chips at the end of Weston-Super Mare pier!